I just spent a sweet week in Paris, catching up with friends and checking out some new sweet treats (and old favourites). Most summers, I spend a month or longer in Paris but this year I only had a week so all my research-eating had to be condensed, meaning that whenever I met up with friends, I made sure we checked out someplace new each time. It’s the only way I could manage getting through so many places in a week (friends=sharing!)

One of my favourite discoveries this year has to be the newly-opened Une Glace à Paris in the Marais.

A tiny storefront hides a range of artisinal ice cream created by Emmanuel Ryon, Meilleur Ouvrier de France Glacier and Champion du monde de pâtisserie, and Olivier Ménard who has worked notably with Pierre Hermé and at Harrod’s.  First rate ingredients sourced from all around the world go into their ice creams, sorbets and other pâtisseries – a must try is the intriguing Smoked Indian Vanilla ice cream. At first taste it’s like smoked cheese but the smokiness gives way to a creamy vanilla flavour so you’re just left with a hint of smoke. Intriguing and perfect.

You know I’m always going to try macarons in Paris (if not there, where?) and Pierre Hermé‘s flavours are unfailingly innovative.  On a hot day, Infiniment Pamplemousse (mouth-puckering yet sweet grapefruit) was perfectly refreshing.

Since reading about Bontemps Pâtisserie on Lindsey’s blog earlier this year, it’s been on the top of my list of places to try. Tiny sablés filled and topped with different flavoured creams? Yes please!

Again, an unassuming storefront (my friend who lives around the corner and who walks by every day had never even noticed the place!) hides gorgeous glass cases of jewel-like sablés…

(they also have fabulous tiles on the floor!)

These went down an absolute treat with a bunch of locals when I brought them for a Sunday lunch dessert. It’s kind of lucky I don’t live in Paris anymore. I’d be here all the time…

One of my missions this summer in Paris was tasting as many different kinds of choux desserts as I could (within reason – and hence the friends needing to help me taste!). Choux is my preferred pastry right now and I’m intrigued to experiment a little more come the fall with flavours and fillings…

One of the first places to jump on the choux train in Paris was Popelini.

According to their site, these treats were created in 1540 by an Italian pastry chef named Popelini and named “pâte à chaud” which eventually became “pâte à choux” as it’s known today.  Although there are different versions of the history of the choux, we can all agree that it makes delicious sweet treats… Popelini has around a dozen different flavours, including the Choux du Jour.

(my favourite this trip, not pictured, was the rose and raspberry version)

One of the more well-known places to pick up a choux pastry treat in Paris might be L’éclair de génie (now with multiple locations).

Christophe Adam‘s stores now sell not only éclairs but frozen treats and “barlettes” (an éclair-shaped tartelette). You’ll have a hard time choosing…

Opened in 2011 (and just moved across the street to a much smaller storefront), L’atelier de l’éclair does both sweet and savoury versions of the éclair.  Make sure you are there early for the lunchtime “club” éclair – they make them to order and when they run out of pastry, you’re out of luck. Still, I’m sure (like me) you can console yourself with a sweet version 😉

A favourite last summer when I visited Paris was the Pâtisserie des Rêves‘ newest location on the 3rd floor of BHV… I tried their desserts in the tea toom (Saint Honoré and Tarte au Citron) with my favourite teatime companion, Jill Colonna… 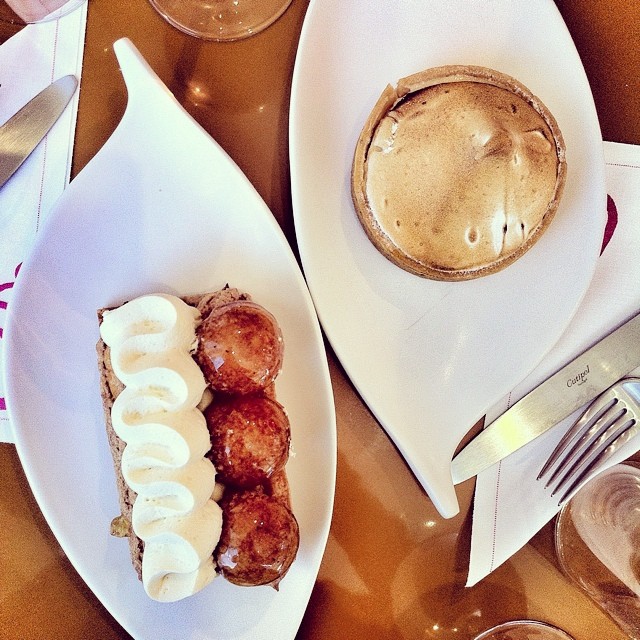 This year I went for the choux à la crême…

(the pink picks are to help stabilise them as you transport them – and even after some jostling around in a crowded street, these choux escaped unscathed!).

I really enjoyed these however, I found the ratio of cream to pastry a little heavy. But that’s just me. They were exquisite to look at and the flavours were spot on (vanilla/lemon, chocolate and pistachio).

Finally, I checked out La Maison du Chou which I had been eying on a couple of previous trips…

Originally with just one location in the 6ième, La Maison du Choux now has a tiny storefront on the Ile St Louis as well. The choux are filled to order so they don’t go soggy and you have a choice between vanilla (nature) or chocolate either of which can be infused with the flavour du moment (it was strawberry confit when I was there) – so you bite into the chou and there’s a little surprise inside.

So unassuming but so very, very good. These might have been my favourites of the trip. Maybe. But you know, I might have to go back to try some more, just to be sure 😉

Remember, things change, places go on holidays, change locations or opening hours so always check before you go (and in Paris, don’t necessarily rely on the website or social media of a place to be up to date. Phone is always the best way to make sure the place you are headed for is open!)

* obviously a work in progress.

Disclosure: This is not a sponsored post in any way. Just a list of what I liked pastry-wise in Paris in July 2015. All opinions entirely my own.