Book review: F is for France 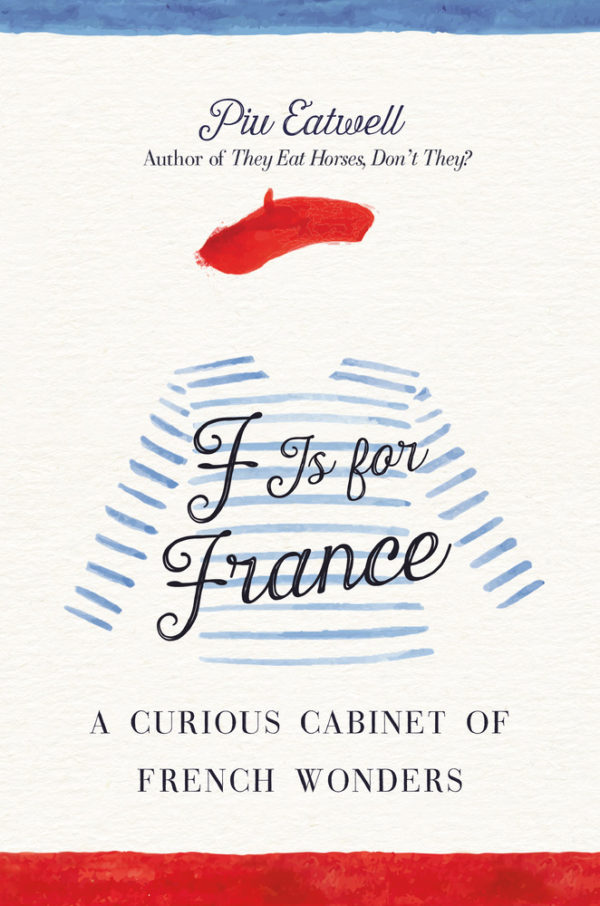 If you’ve been reading here for a while, you’ll know how much I love France. I lived there, studied there and have travelled there countless times. Heck, we even bought a house there 😉 So it won’t come as any surprise to you that I love reading about all things French and that when I was offered a review copy of Piu Eatwell’s latest book, F is for France: A Curious Cabinet of French Wonders, I jumped at the chance.

Born in India, of mixed Anglo-Indian descent, Eatwell attended Oxford University, where she graduated ‘summa cum laude’ with a starred First Class degree in English.  She has worked as a lawyer and television producer for the BBC and other TV companies and now divides her time between London and Paris, writing about French-themed subjects as well as historical non-fiction. Her first French-themed book, They Eat Horses, Don’t They? The Truth About the French won a number of awards, as did her second book, an historical mystery entitled The Dead Duke, his Secret Wife, and the Missing Corpse.  F is for France is Eatwell’s follow up to They Eat Horses, Don’t They? and is a delightful summer read – an exploration of France’s heritage (literary, culinary and all things quirky!).

F is for France explores little known (and often bizarre!) facts about French culture which, anyone who has lived or visited will attest, can be challenging to understand.  Filled with arcane laws and bizarre paradoxes, French culture is a trivia buff’s delight (and indeed, this book would see you winning French-themed pub quizzes everywhere!).

1.  French law does not allow shared custody of pets.
2. The French nation consumes around 320 baguettes per second.
3. There are 49 million bubbles in a standard-sized bottle of Champagne.
4 The French are NOT the biggest consumers of cheese in the world (you’ll have to read the book to find out who is!)
5. Emma and Nathan were the most popular baby names in France in 2015.
6. There is a French film featuring 43 minutes of continuous cigarette-smoking time (again, read the book to find out which one!)
7. According to French bourgeois etiquette, women may not serve themselves wine at the table (ummm….?!?!)
8. There is a law dating from the 1800s forbidding French women from wearing trousers unless they are riding a bike or a horse.
9. France is the home to 39 UNESCO World Heritage sites (how many can you name?)
10. The most common surname in France is Martin.
11. There are over 25 varieties of garlic grown in France
12. French typists warming up type a phrase that translates to: “Take this old whiskey to the blond judge who is smoking a cigar.” (our equivalent is “The quick brown fox jumped over the lazy dog.”).
13. The longest sentence in French literature is 847 words!
14. There is a museum dedicated to French fries in Bruges, Belgium.
15. “Where is the Mona Lisa?” is the question most-often asked at the Louvre information desk.
16. Potatoes were once deemed illegal in France.
17. There is a French law stating that no alcoholic beverages are allowed in the workplace, except beer, wine, cider and perry (a fermented pear drink). Uh, ok….
18. It is law that you must carry a portable breathalyzer in your car. There is a fine if you are caught without one.
19. Self-serve ketchup (in unlimited quantities) has been banned from French school lunch rooms since 2011. Schools may only serve this in “limited cases”.
20. There is a village in France where UFOs are banned from landing.

These, and so many more colourful and off-beat facts and figures will delight anyone with an interest in French culture – there are even a few recipes for the French food-lover. Honestly, I’ve read this twice now and each time I read, I learn something new. It’s definitely destined for our vacation rental library of books.

US/Canadian readers – win a copy of F is for France thanks to St Martin’s Press. Details here. 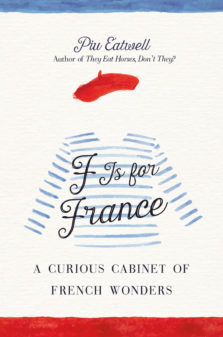 Buy F is for France on Amazon (this link should bring you to the Amazon store in your country) or for free worldwide shipping, buy from The Book Depository.

Please note: The product links from Amazon and The Book Depository are affiliate links, meaning if you click over and purchase something, I will receive a very small percentage of the purchase price which goes towards maintaining eat. live. travel. write. Thank you in advance!

Disclosure: I received a copy of F is for France for review purposes. I was not asked to write about the book, nor am I receiving compensation for doing so. All opinions are 100% my own.

← Win a copy of F is for France (US/ Canada) (CLOSED)
Tuesdays with Dorie (Baking Chez Moi): Rice Pudding with Strawberries and Spiced Hibiscus Syrup →

4 Responses to Book review: F is for France