The idea of a restaurant that serves as a “real-time learning experience” for students might strike fear in the discerning diner’s heart. However, when this same restaurant is described as a “destination of choice”, it begs to be put to the test.

The Chef’s House is run by students in the full-time culinary and hospitality programs at George Brown College and their eagerness to please (pass?) is evident as soon as one steps through the door. We encountered a door opener, a greeter, a reservation checker and someone who showed us to our table.

Surprisingly empty mid-service on a Thursday night (a large party had not shown up), and therefore lacking a little in ambiance, The Chefs’ House has the potential to be a noisy night out. Close-set tables and the open kitchen concept (very Food Newtwork!) would make conversation challenging when it’s busy. The emptiness made for a better experience for us, but left a large, bored-looking contingent of unoccupied wait staff, presumably called in for the large party.

We began with a carafe of sparkling water (filtered on site) at the very reasonable price of $3.00 for an unlimited quantity for the table, “part of [their] commitment to being local and green.” Freshly-baked ciabatta and brown bread arrived with the water. Delicious and more-ish! 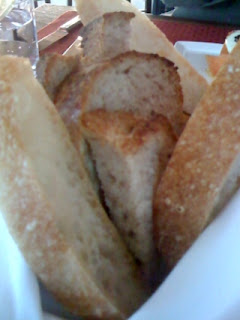 Next, an amuse-bouche. An amuse is supposed to be a small bite. You would need a pretty big bouche to eat this in one-bite: A new potato wrapped in gravalax, topped with yoghurt sauce and kelp caviar. 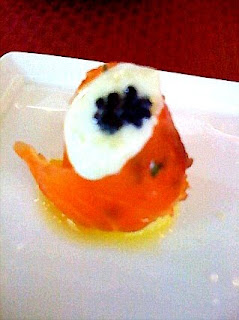 The menu ($39 for three courses, $45 for four) gives pride of place to local, seasonal ingredients like the ubiquitous springtime menu items ramps and fiddleheads.

For starters we chose white asparagus with pickled wild leeks and Canadian proscuitto. These flavours married delightfully and provided a wonderful mouthful of freshness to start the meal. 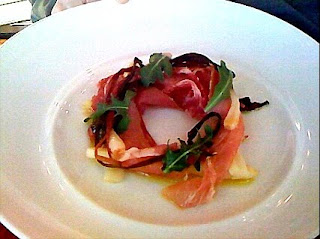 The spring salad of peas, arugula fiddleheads and shaved cheddar also included (unlisted) asparagus and snow peas. As for the “arugula fiddleheads”, well they were just very small arugula leaves. Is that what they are supposed to be? The peas were rather odd – like broad beans in size and texture but pea-like in the mouth. Tasty but had it contained just the three ingredients listed, it would have elevated it into a truly memorable starter. This tasted like a nice salad that I could make at home. 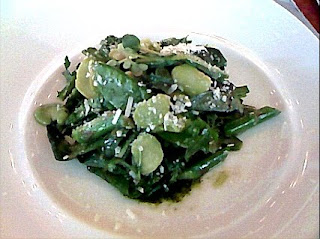 For mains, we chose steamed mussels and scallops in a coconut and lemongrass broth. This, like the salad, contained additional ingredients – calamari, shrimp and fish. This fragrant Asian-inspired broth cradled the perfectly-cooked, plump morsels of seafood. Mr Neil could have eaten a much larger serve of this! 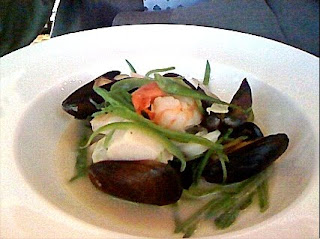 The bacon-wrapped chicken supreme, fiddleheads, fingerling potatoes and bacon ragù was a disappointment. Normally, a bacon-wrapped piece of stuffed chicken is my idea of heaven, but the ragù was just bacon FAT hiding under the chicken. Such high hopes, dashed with one mouthful. 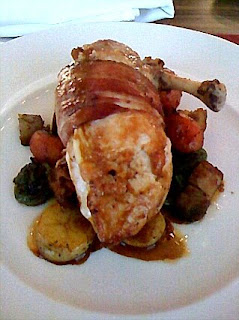 The chicken was moist and juicy with crispy skin, wrapped in thin-without-being-burned bacon and stuffed with earthy mushrooms and creamy sauce. The fingerling potatoes, despite being cut into neat coin shapes (I prefer them whole in their odd, misshapen glory) were outstanding. The fiddleheads tasted woody. Meh.

With our meal, we drank a very reasonably priced ($32) Huff Estates off-dry Riesling from Prince Edward County. Extremely happy with this choice.

Onto desserts. I was intrigued by Brown bread ice cream, peanut butter anglaise and blueberry compote. Who could resist that? Upscale PB+J, right? WRONG! The muddle on my plate could more accurately be described as (stale) lemon pound cake topped with vanilla ice cream with a side of peanut butter anglaise and blueberry compote Le tout inexplicably served with a sugar cookie spoon. A case of trying to be too clever, methinks. Individually the components were good (except the cake) but all together it was a mess. 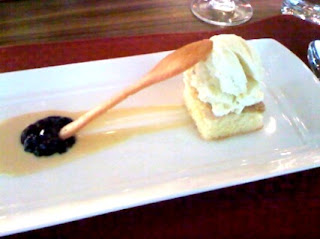 The cheese plate contained aged Gouda and in the server’s words, a “stinky cheese from Québec” with fig compote and very thin poppadom-like crackers. Small, but satisfying. 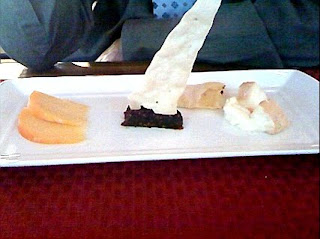 At this point, we had been in the restaurant for a little over an hour. The service felt rushed and we both felt a little like “what now”? A ten year-old tawny and a late harvest Riesling bought us a few more minutes. 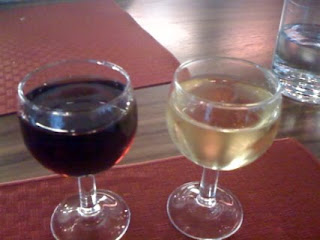 Our bill, without tip was $143, which you expect for a “destination” restaurant. The question begs though – is it the destination or the journey that matters? For the money, I might take my travels elsewhere next time.