Slowly but surely, I have watched our neighbourhood’s Polish roots recede over the years and Staropolska is no exception. Closed down in March, it reopened under the much less exotic name of Bistro 299, under the same ownership but presumably with a different vision for the place.

I want to like Bistro 299, I really do. After all, it’s located a mere 5 minutes’ walk from my house so would be the perfect weeknight location. We walked there in the aftermath of what they’re calling the “apparent tornado” and didn’t even get that wet, it’s so close.

The restaurant is visually a lot more welcoming than its previous incarnation. The night we ate there the restaurant smelled like sweet potato fries. Always a good thing! On perusing the short menu, I thought to myself that at least by keeping the menu small they have not bitten off more than they can chew. I do note they have added a “Staropolska tribute” section of the menu, apparently after protests that they no longer offered the Polish specials.

We struck out in terms of drinks – both of my husband’s choices (an Okanagan 1516 beer on draft and a bottle of Riesling) were not available so he settled on a Sleeman Honey Brown and what was left in their last (open) bottle of the Riesling – about 3 glasses’ worth for which we were charged $21. The wine list is fairly small, even more so when many of the choices aren’t available. Out guest wanted cider, of which they have none.

We were served the ubiquitous bread and balsamic/olive oil dipping bowl – fairly average as they go. The bread was doughy – reminiscent of the Polish “baguettes” you find all along Roncesvalles which are dense rather than being crunchy and crusy, like a real baguette. 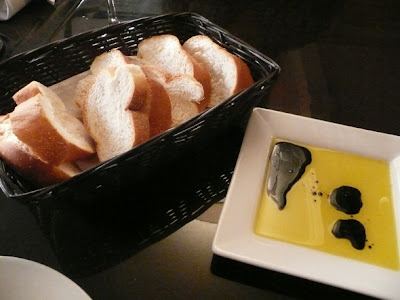 For our starters, we chose:

Grilled calamari with a grapefruit reduction ($7.95). After his first bite, Neil pronounced: “This is why I don’t do calamari at home.” The line between perfectly grilled, melt-in-your-mouth calamari and rubbery is very fine. Bistro 299 crossed that line. The grapefruit reduction was so overpowering and acidic, it tasted like they had served too much salad dressing on the plate and it had slid over to the seafood side. 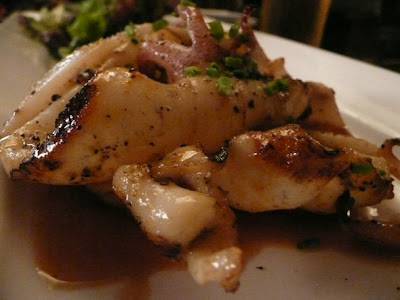 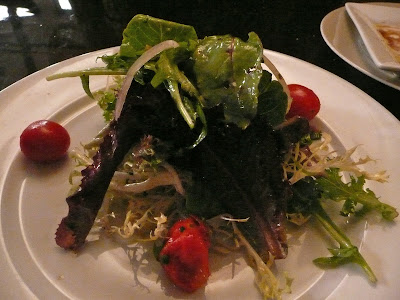 Roasted beet salad with buttermilk and goat cheese dressing ($5.95). I was excited to try this as I have only just started to eat beets. I still have this mental image of my nana’s canned beetroot salad from the 1970s but have come to appreciate beets recently as they’re being used in such innovative and tasty ways. Ummm, not at Bistro 299. Visually, not the most appealing dish and taste-wise… well, it tasted like canned beetroot. There was no hint of “roasted” about it. It was (overly) cold and too large a portion. I could barely eat a quarter of the dish. The dressing was pleasant, just not on the beets. 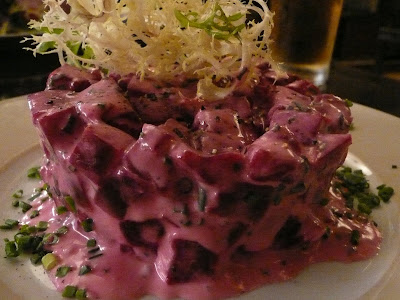 For mains, the moule-loving Neil couldn’t resist the daily special ($8.95) – moules-frites with a Thai coconut lemongrass infused broth. The presentation of these was stunning (love those bowls!), however we had to ask for bread to mop up the broth, which I later heard our server tell the next table was “the most important part of the dish”. Funny she didn’t see fit to bring our table bread with that dish… Nonetheless, a successful interpretation of a classic. 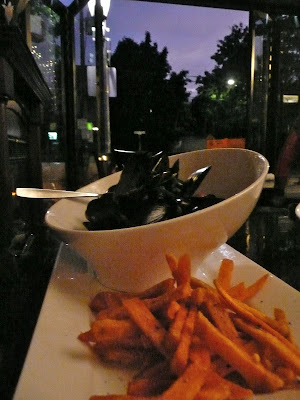 I chose the marinated flat iron steak with truffled mashed potatoes and seasonal vegetables ($17.95). This was a tasty dish, though their interpretation of “seasonal vegetables” amounted to three asparagus spears. More veg and less mashed potato on a steamy midsummer Toronto night would have been welcome. The “truffled” flavour was very light – perhaps the bottle of truffle oil passed by the potatoes in the preparation but you had to really search your palate to find that earthy truffle flavour. 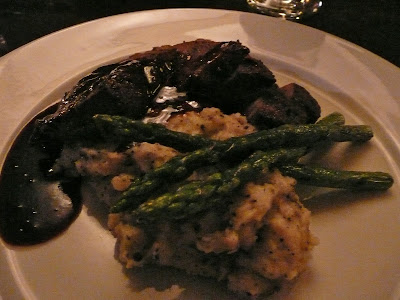 Our vegetarian guest selected the tempura battered Arctic char with sweet potato fries ($14.95) which sounded promising. Unfortunately, whilst there was a mountain of (delicious) fries, there was one lone, thin piece of fish, albeit in a lovely light tempura batter. For a main, I would expect one larger or two smaller pieces of fish. The dipping sauce was an interesting twist – soy sauce with scallions, but our guest missed her tartare. 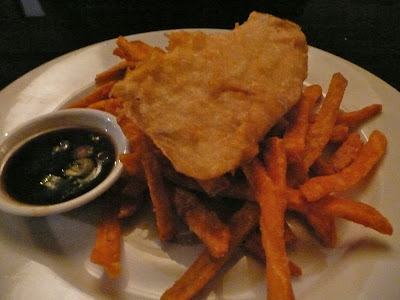 For dessert we shared the berry crème brûlée ($5.95) and the flourless chocolate cake with molten chocolate ganache ($5.95). The crème brûlée was acceptable – the crispy caramel made just the right “thwack” sound when you hit it with the back of your spoon, though served in a dish too deep to be considered a classic brûlée. 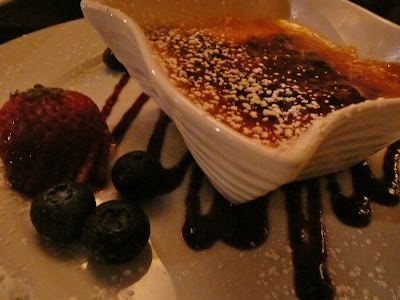 The flourless chocolate cake was delectable, though the “ganache” to which they refer was actually a molten filling. Ganache more commonly refers to an icing or topping so I was expecting a cake crossed with a hot fudge sundae. This was tasty and moist nonetheless but was inexplicably served with a dollop of what tasted like Cool Whip. A small scoop of simple vanilla bean ice cream would have served the dish much better.

Service throughout the evening was forgetful at best. We asked for water at the beginning of our meal and it didn’t arrive until we reminded our server halfway though our mains. We had to ask for salt and pepper and extra bread for the mussels. We were not offered coffee or a liqueur at the end of the meal, simply a chance to enter a draw to win a day’s golfing (!). Perhaps we should have stuck with the “Staropolska tribute” menu items because I think that’s probably what they do best.