What to watch: Abe 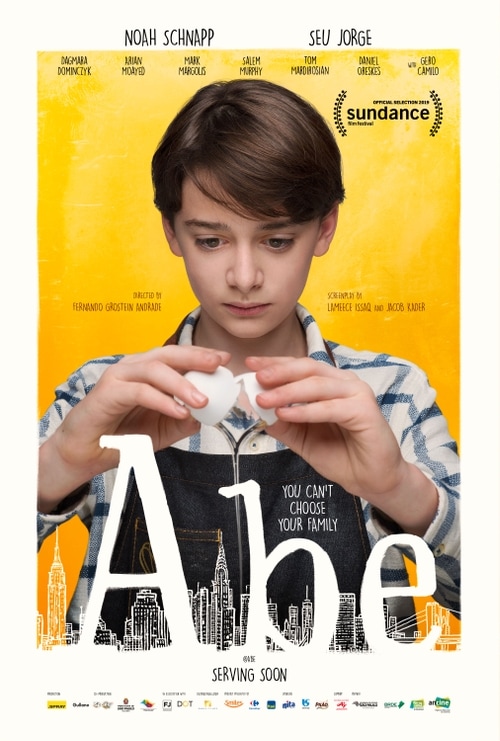 Looking for a charming distraction? I was lucky enough to view an early screener of a sweet new film – Abe directed by Fernando Grostein Andrade, which will be available on demand and on digital starting April 17 in the US (tbd elsewhere but check your on demand and streaming services for upcoming releases). This film is of particular interest to me because of the subject matter, essentially, a boy who loves to cook and who brings people together through his food (did I mention how much I miss my cooking club boys?).

Reading the film’s synopsis I was intrigued…

Twelve-year-old Abe (Noah Schnapp) is an aspiring chef who wants his cooking to bring people together–but his half-Israeli, half-Palestinian family has never had a meal that didn’t end in a fight. Ditching his traditional summer camp, Abe begins working with Chico (Seu Jorge), an adventurous street chef who encourages him to think outside his old cuisines. But when Abe’s deceit is uncovered, he must grapple with his family, his background, and his passions, and whether even the most lovingly-cooked family dinner can heal old wounds.

Ok so while I couldn’t wait to watch, it does sound like there’s a lot going on here: a complex family (Palestinian Muslim grandparents on one side and Israeli Jewish on the other), a precocious child, some dream-chasing and, of course, food. Definitely a lot of plot lines but the film somehow brings them together in a way that it doesn’t feel “too much”.  And while there are some unrealistic elements (what summer camp wouldn’t report a child absent every single day?), it’s quite a delightful 90 minutes of escapism and dreaming about “what could be”.

In one of the first scenes, Abe is baking his own birthday cake and lacking baking powder, he suggests cream of tartar mixed with baking soda (who knew?) but mum isn’t sure of the result so he forgoes the cream of tartar and the cake, unsurprisingly, doesn’t rise 🙁 His parents do recognise his interest in cooking though, and enroll him in a summer cooking camp for kids but on arrival on the first day, we see it’s WAY too basic for Abe (the teacher is talking about mixing food colouring to make fun colours) and he sets out to create his own summer camp in a pop-up kitchen he’s discovered run by a Brazilian chef.

The scenes in the pop-up kitchen are magical and combine a bit of fantasy (because, really, what sort of pop up kitchen would employ a child with no parental consent… but hey, it’s a film so…) and reality (we learn some solid information about working in a kitchen – hint: it’s not all about cooking – as well as about food and flavours). I’m not going to give too much away but Abe continues to grow as a cook and person during his time in the kitchen until it comes abruptly to a halt once he’s found out.

The rest of the film focuses on his very complicated family life as he navigates the pressures from his grandparents of different religions. Recognising that there’s a divide, he seeks a way of bringing them together and the scene where he tries to do just this over a “fusion” meal (he comes up with some SUPER creative dishes that his family are a little suspicious of) is magical, then sad as it descends into a huge argument. Despite this, the disastrous meal does manage to bring the family together but not in the way Abe hopes.

Spoiler: the film does have a happy ending and its just the type of film we all need right now – some lighthearted hope! One for all the family!

Disclosure: I viewed a media screener of this film. I was not asked to write about it, nor am I receiving compensation for this post. Opinions are 100% my own and I only share information about things I really love that I think are of genuine interest to readers.

MY BOOK! In the French kitchen with kids is out now! Click here for details and how to order!