As someone who writes about food I own a lot of cookbooks which I love to use but I’m also a big fan of the convenience factor of being able to access so many recipes online.  Who hasn’t stood in the supermarket madly Googling recipes either because they’ve forgotten their shopping list at home or because they have the “What’s for Dinner” question looming over their heads?

As a teacher, I also make extensive use of the Internet to search for recipes to use with my students in the Haitian culture and International Cuisines units I teach to my Grade 6 class and a unit based on a storybook called Oliver’s Vegetables (I’ve translated this into French) for my Grade 3 class. Unlike finding recipes that the boys can follow in English, finding recipes at their level of French can be very challenging – the Grade 6s are pretty competent but recipes, even in our mother tongue, can be full of vocabulary we may not be familiar with – and then even when it’s a level they can understand, there’s the question of whether the recipes will even work (sometimes I don’t have a chance to test everything I make with the boys – it’s them choosing the recipes so they are unpredictable units to teach).

Over the past four years, I have found myself, again and again on the Ricardo Cuisine French website after I have searched for the recipes the boys want to make (I have them choose based on images and descriptions of dishes what they are interested in researching and ultimately, making and eating). The recipes are straightforward, written in clear and easy-to-understand French and, most importantly, they work!  The boys have had a lot of success with the Ricardo French recipes for all sorts of dishes and parents often tell me they make them at home! I’d say that is the sign of some pretty good, reliable recipes!

When I was offered the chance to explore some of the BBQ recipes on Ricardo Cuisine, I jumped at the chance. As the school year winds down, we take our meals outdoors and anything that can be grilled means I am not heating up the kitchen by cooking on the stove or in the oven.  I really liked the variety of recipes on offer and that it’s not just recipes for grilling meats.  Too often BBQ can mean “heavy” meals but there were so many recipes for lighter dishes that I actually had a hard time choosing which one to make! From salads and vegetable dishes to pizzas and even some cold spring rolls, there are a number of recipes that don’t  necessarily make you think “BBQ” but it really is a great selection of dishes that might make you think differently about the grill!

The recipe I chose to make is one I never would have thought to make use of my BBQ for in the past – a Vietnamese-style grilled chicken bowl. Previously I have made similar dishes where I have grilled the chicken on the stovetop or roasted in the oven (neither are great options for the summer) but the marinating and BBQing of the chicken really added another level of flavour and made me think “Why haven’t I done this before?”

I was also keen on this recipe as when I made it, it was very hot and the noodle bowl includes a wonderful array of fresh vegetables … 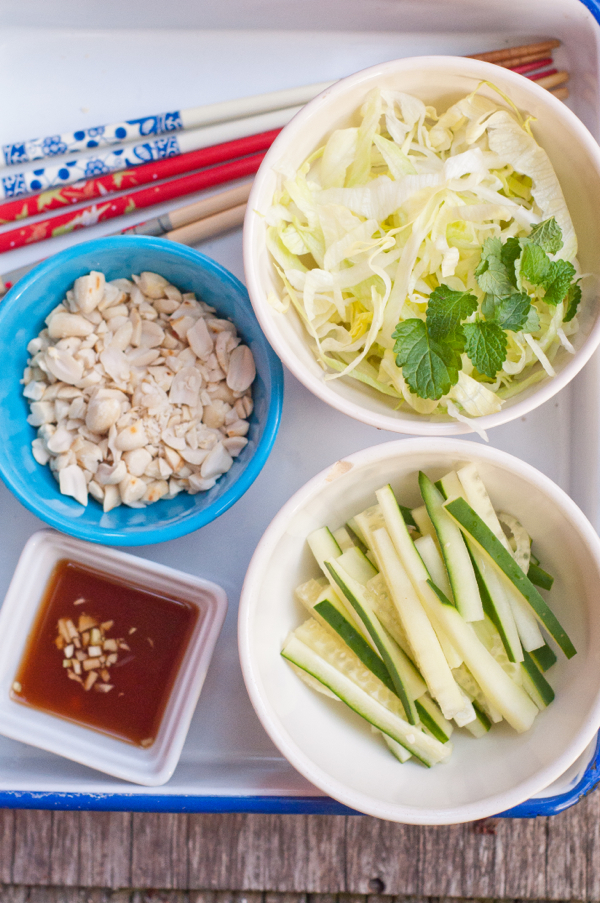 (shredded lettuce, sliced cucumber, toasted peanuts and a flavourful sauce – I placed these in the middle of the table and let people serve themselves)

The chicken thighs marinated overnight in a spicy, garlicky, sweet and sour sauce. They took no time to prepare and then the cooking time was only about 8-10 minutes. 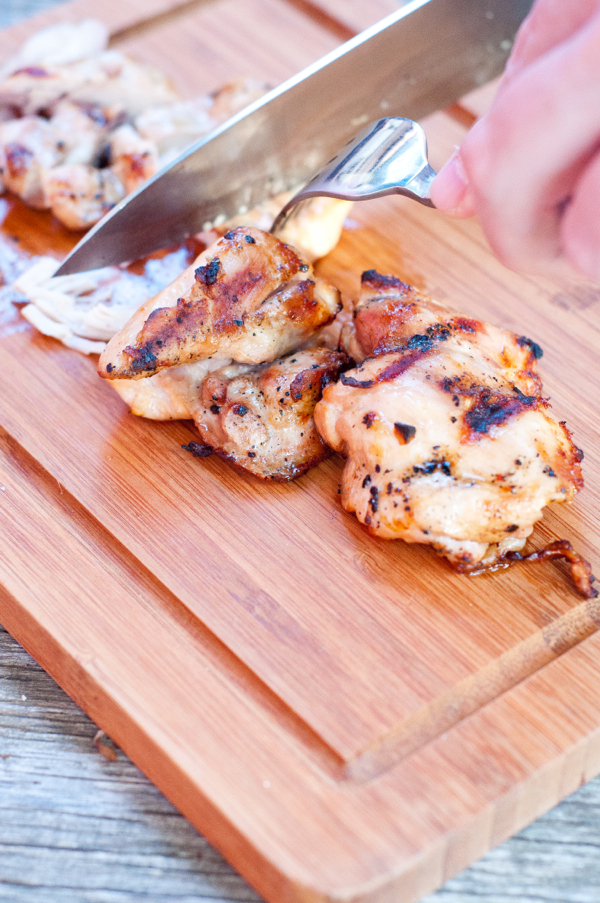 The meat was very juicy and tender, thanks to its overnight bath and so flavourful from the grill… 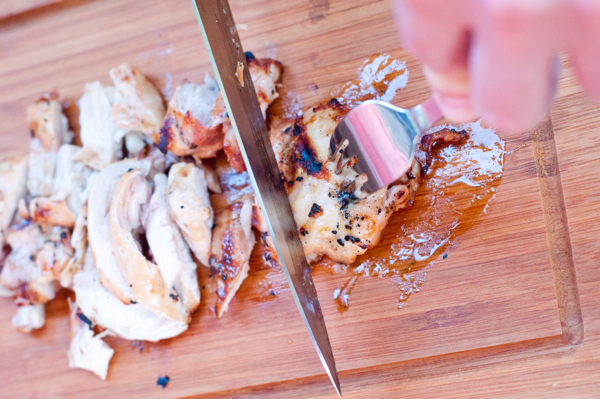 We served everything family-style and let people help themselves.

Such a satisfying meal requiring a minimal amount of prep and – bonus – all the cooking is done outside…. 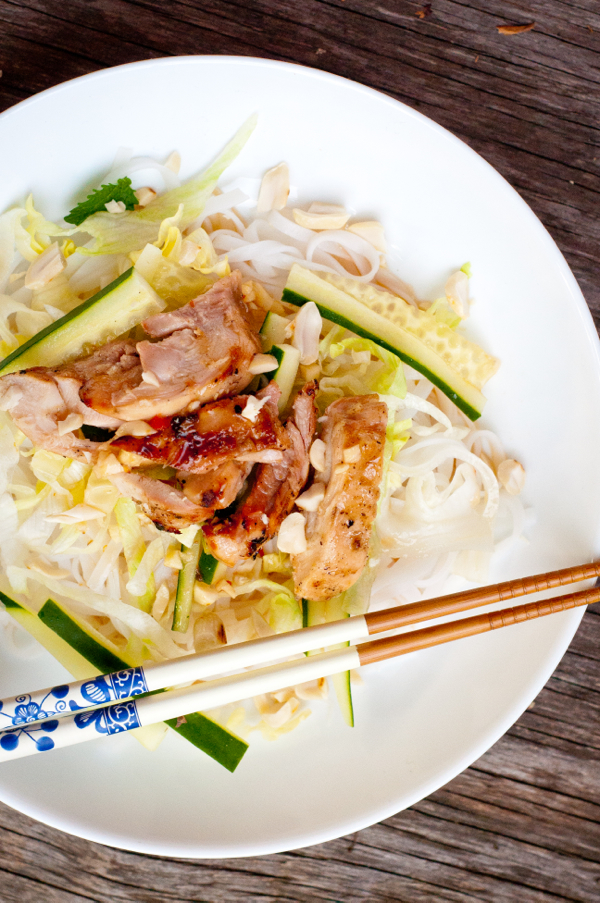 I am “sans BBQ” for the summer but I know I want to make these again  and in the meantime I am bookmarking many other recipes to make when I am reunited with my grill – beef and mango salad, beef and beef pepper grilled pizza, avocado and grilled corn salsa and hey – doesn’t a berry, chocolate and cake skillet sound amazing?

What about you – what’s your favourite thing to grill?

Disclosure: I received compensation in exchange for promoting the BBQ recipes on RicardoCuisine.Com. All opinions 100% my own and I only recommend products that I really love. 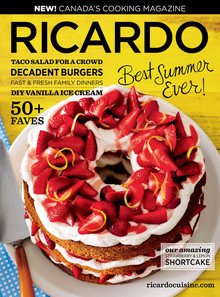 I was excited to hear earlier last fall about Ricardo Magazine (the print version) launching an English language version.  And guess what?

← Win a year’s subscription to Ricardo Magazine (Canada)
French Fridays: (some of) My favourite restaurants around Nérac (Lot-et-Garonne, France) →