Sadly this will be the final post about my recent trip to Kelowna although I definitely don’t feel that 5 posts has done it justice. In just 2 1/2 days whilst we covered a lot of ground, we didn’t have time to visit every winery, store, farm, restaurant, bar etc.. although we did pretty well in the eats and drinks department, checked out a pastry class a market and some farms.  I’m the first to admit that my experience is definitely limited but I do feel it’s representative of all the exciting things happening around Kelowna area. What shines though everywhere we visited is everyone’s passion for what they do. 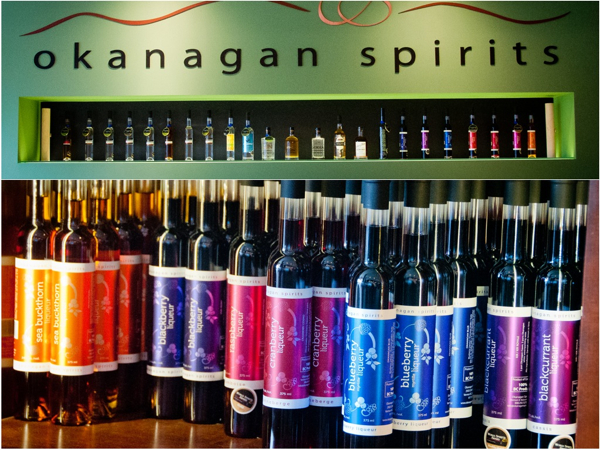 One of our first stops in town was at Okanagan Spirits, an internationally acclaimed craft distillery featuring a unique selection of specialty spirits. Made from 100% B.C. fruit, and without additives, chemicals or artificial flavours, their spirits have won numerous awards both domestically and internationally (they were most recently awarded ‘Distillery of the Year’ in 2013 by the World Spirits Organisation based in Klagenfurt, Austria).

Okanagan Spirits is recognized as a Master Class distillery, and one of the top craft Distilleries in the world. More than 25 varieties are produced in their traditional copper-pot Stills. Their products include Fruit Brandies, Liqueurs, Grappa, Aquavit, Gin and Taboo Genuine Absinthe.

Okanagan Spirits can be found in some of the finest restaurants and resorts across Canada as well as globally at Canadian Embassies. It has also been shipped to several private customers in Europe, the Americas, Asia and Africa.  They currently run two Distilleries in downtown Vernon and downtown Kelowna. Both locations have active working stills and offer tours and tastings.

We met and spent a very happy hour or so with Michael Chisholm tasting and chatting. I was a huge fan of the fruit liqueurs – especially the Sea Buckthorn which you don’t often see (we had this in a few dishes at noma earlier this year but had never seen it anywhere else…).  It’s described as “a healthy spirit” which will leave you feeling feeling refreshed – it is, indeed, very citrusy!  Sea buckthorn is packed with anti-oxidants and nutrients, in particular, Vitamin C and E – apparently Russian astronauts used to be given this fruit before being sent into space.   They suggest serving it with a platter of cheese or pairing it with a spicy ginger beer or citrus soda – I couldn’t agree more. Sea buckthorn spritzer anyone?

If you’re even a little bit “into” spirits, you’ll definitely want to stop by on a visit to Kelowna. And I bet you can’t leave the store empty-handed! I, sadly, did as I only had carry-on luggage but they will ship anywhere across Canada (free shipping with a minimum of 3 bottles).

In the Okanagan, there is no shortage of wineries to visit and when people found out I was heading there, I was bombarded with names of “must visit” places. Most of those have gone on my “next trip” list but we did manage to get to two wineries (as well as tasting some other local wines with our meals during the weekend!).

Summerhill Pyramid Winery is as much a destination for its pyramid as it is for its wine and the lovely Sunset Organic Bistro restaurant (with spectacular views).

Organic practices have been an integral part of Summerhill since the vineyard was purchased by the Cipes family in 1986. They believe producing wine organically has not only benefits the environment but also allows for the grapes to express their surroundings with qualities that are a true articulation of the Okanagan terroir.  Check out this video by The Vancouver Sun featuring Summerhill CEO Ezra Cipes and winemaker/viticulturist Eric von Krosgk formore information about how these practices influence the style of their wine:

Summerhill has won numerous awards for its sparkling wine and icewine, including Best International Sparkling Wine at the London International Wine & Spirits Competition (2010). All Summerhill’s 100% certified organic, biodynamic wines are aged in a 4-storey tall pyramid, built according to the ratios of Sacred Geometry. The pyramid is a 1:8 ratio of the dimensions of the Great Pyramid of Egypt.

The property is also home to The Mallam Cabin – a restored 1880s cabin that is Canada’s only exhibit of first contact between the original peoples and first European settlers. It’s well worth a look!

If you’re interested in organic/ biodynamic wine production, this is definitely the place for you to check out whilst in Kelowna.  Information about their complete range of wines can be found here and details on their tours and tastings can be found here.

Our final winery stop on the trip was at Tantalus Vineyards.

Tantalus was founded on the belief that “exceptional wines made from a single vineyard of outstanding pedigree would capture the imagination and palates of those seeking authenticity and a sense of place.”  Old vine plantings – 1978 Riesling and 1985 Pinot Noir and Chardonnay are the backbone of the vineyard to the extent where other varietals were removed and new plantings of these 3 flagship varietals started in 2005.   Tantalus’ inaugural 2005 vintage was favourably received by Canadian and international wine critics.

Situated on the eastern slopes of the Okanagan Valley, overlooking the shores of Lake Okanagan and the town of Kelowna this land was originally known as Pioneer Vineyards. Table grapes were first planted on this site in 1927 and today it is known as the oldest continuously producing vineyard in British Columbia.  Tantalus’ winemaking philosophy is based on the concept of terroir.  All the grapes are sustainably grown at the vineyard using a non-interventionist approach to the winemaking process that allows each wine to express the unique character of the vineyard. Tantalus has the first LEED certified winery building in British Columbia and an extensive environmental program.

Fro the beautiful tasting room to the wonderful wine, Tantalus is again, a “must” when in Kelowna.

Disclosure: I was a guest of Tourism Kelowna and my transportation, accommodation and all meals were covered. I am not being further compensated for writing about my experiences and all opinions are 100% my own. Neither Tourism Kelowna nor the businesses mentioned reviewed this post before publication.

9 Responses to Wines and spirits in Kelowna (British Columbia)