So seeing as Miss Mardi was doing the demo on Saturday of her Mini Deconstructed Pesto Pizzas for Bertolli Sauces, I thought I would do something similar for dinner. Partly as ode to Mardi’s success on winning, and thanks to Bertolli for sponsoring it all.

Alas, first disclosure: I had not Bertolli sauce on hand, so this is a Bertolli-free recipe. Sorry guys. (Editor’s note – it would be awesome with the Bertolli Portobello Mushroom with Merlot pasta sauce…)

Second disclosure: I bought the pizza dough, did not make it myself. A bit strapped for time today.

So with the multi-grain crust and pizza sauce, I basically was just doing my version of a vegetarian pizza, using bits & pieces left over in the fridge.

Since I said this was a Mr. Neil veggie pizza, I of course added some pancetta. That’s right, Thelma (Editor’s note: NEIL is the one who names the pork pieces, not me…) is up from the basement. She’s a bit over-cured, so rather salty. Tastes sublime, but better in a pasta sauce (especially on the edges) than on its own — this was a smaller end piece, so I’m not surprised the salt content was a bit higher. I chopped it up into tiny pieces – about 3-5mm cubes. (Sorry Mardi, no picture of the process.)

Then for cheeses I used two bits leftover in the fridge, finally topping with shaved parmesan. No mozzarella here, girls.

A sprinkling on Penzey’s secret Black & Red spice, of which my supply is quickly dwindling. 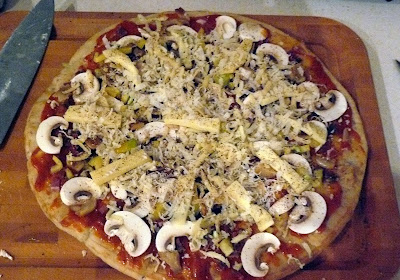 Then into the over for 12 minutes at 425F, resting for 3 more minutes.

Paired with a Samuel Adams lager.

Results? A nice spicy pizza, the saltiness of the pancetta and heat of the peppers were complemented nicely by the cheeses. 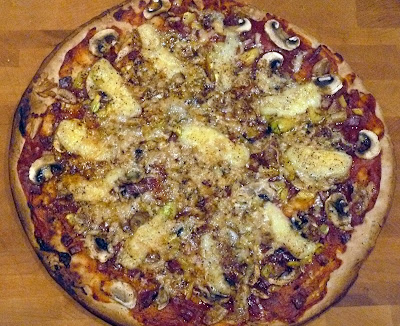 Mardi’s opinion? A small slice of this was served to me upon arrival in Toronto from San Francisco and it was mighty tasty. Maybe a little spicy for my liking but certainly a rival to any store bought pizza. Thanks Neil!