So tonight we decided to cook up some of the thick slices of our good friend George.

I must say, they look very nice in the frypan! 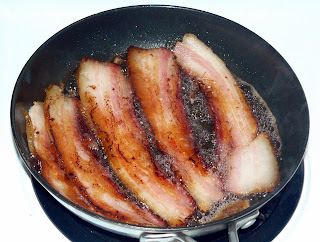 It ended up being the centrepiece of dinner, they were so thick. (With apologies for the odd-looking dinner…am in “clean out the fridge before flying” mode, so picking whatever perishables I can!) 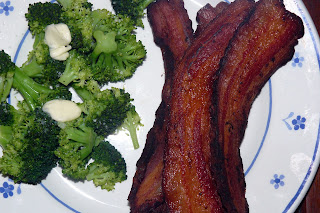 VERY tasty. Thick like back (peameal) bacon, and the fat crisped up nicely and could be eaten as well. Melted in the mouth. 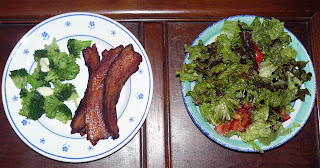 VERY salty as well. To be honest, too salty. I’m not shy on salt, but I had to take a break eating the slices (Mardi will tell you that’s a shocker for me) and have something to cleanse the palate between slices. It really became a bit too much. 🙁 (Editor’s note – perhaps you should slice the bacon a bit thinner??? Just an idea?)

A slice or so ON something might be perfect. Otherwise Michael Ruhlman says simply to blanche the bacon before frying up…so might try that when Mardi’s back.

5 thoughts on “What does a single man eat?”