Since we received fiddleheads in our weekly organics delivery, we needed to figure out what on earth to do with them.. I mean, they are pretty and everything but we had no idea how to cook them etc…

Googling around, I was greeted with warnings a go-go about how to cook them properly since they can cause what sounds very much like food poisoning. I found this recipe for Fiddlehead Cashew Stir Fry which I thought sounded great. Since I am not so great about following recipes, I based tonight’s dinner on that one and here’s how it went.

Wash and prepare the fiddleheads by removing the fuzzy fronds and cutting off any dry ends (geez, this was a right pain in the butt – it took me about 10 minutes to clean half the fiddleheads. Fiddly work indeed – haha!). 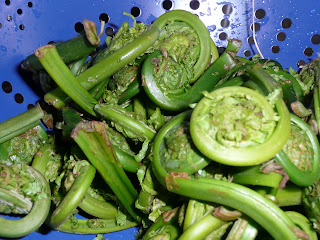 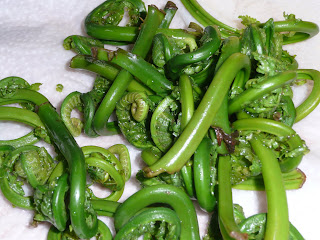 and here they are cleaned up (well I now see some brown bits I missed – ooops!) 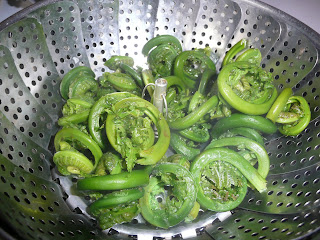 (here they are in their steamer) 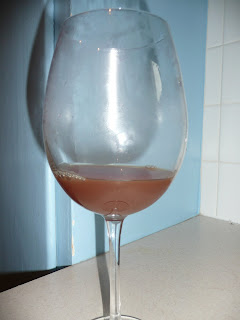 and eeeeeeeew – here is the water that came out of the steamer! Yikes! 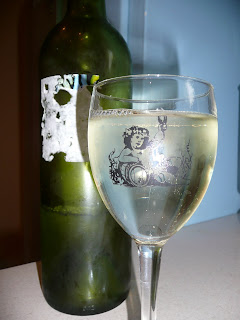 While I was cooking I had a glass of this ratty looking bottle I found in the fridge that Neil had brought back from a camp weekend. The bottle looks like it spent the weekend in an ice bath but I spied the words “Sauvignon Blanc” on the back and it went nicely with the prep time and the dish!

Prepare other vegetables and ginger.
Preheat oil in sautée pan on medium-high heat.
Stir-fry the broccoli and mushrooms til they are still a little crunchy.
Add in the garlic and grated ginger, plus the cashews. Combine well.
Add the shrimp and cook til they are pink.
At the last minute add the fiddleheads otherwise they will go too soggy (especially if you have cooked them for a really long time in the steamer as the health warnings tell you to!) 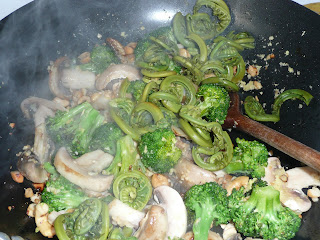 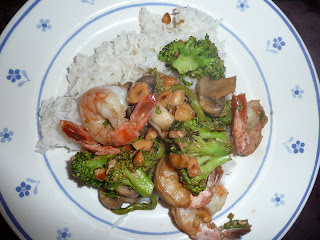 The fiddleheads were kind of woody by themselves, just out of the steamer. Masked by the garlic, ginger and soy, they were edible. Not convinced, foodies, not convinced!