In cooking club this week, I did a bit of a Jamie Oliver myself – I presented the boys with a number of ingredients and asked if they knew what they were.  To be fair, the ingredients weren’t tomatoes or potatoes, but much more unusual: peas in a pod (someone guessed edamame!), zucchini (squash or cucumber were the guesses), jalapeno and banana peppers (the boys knew these were peppers, just not what kind), garlic and ginger (both guessed correctly), water chestnuts (most had never seen these before), Enoki mushrooms (NOONE knew what they were but they were intrigued!), coriander (correctly guessed) and bok choi (also correctly guessed).

Once I showed them the noodles, chicken and soy sauce, they were all very excited to realise we were making a stir fry – Jamie Oliver’s Chicken Chow Mein, to be exact!  Now not all those ingredients appear in Jamie’s original recipe but I had the peas and zucchini at home and thought it would be fun to add those, and I couldn’t find shitake mushrooms anywhere so went with enoki – also a fun addition.

Whilst I busied myself with the noodles and chicken, the boys got chopping:

Check out that technique!!!  I demonstrate how I would like each vegetable cut and have everyone observe so they are learning all different chopping and cutting techniques.  I am also trying to impress upon them the importance of keeping a clean and organised cooking space and you can see they are doing a great job at that too.  We always do the mise en place before we start cooking/ assembling the meal and then make sure our stations are clean and the dishwasher is packed so we can just cook, pack the food and go – I find that usually after the cooking has taken place, there is little interest in cleaning up (hey – that’s just like me!) so I am trying to teach them useful habits to get into in the kitchen.

Once the noodles were cooked, we splashed a little sesame oil on them and covered them up to keep warm. I also stirred in the coriander to impart some flavour whilst they were resting:

Then we got cooking:

At the end, when we stirred the veggies and chicken into the noodles, we added some torn bok choi leaves for some good crunch: 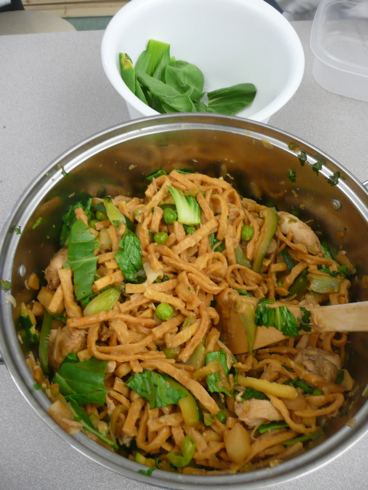 Did they like it?  The picture below speaks for itself!

This smelled absolutely amazing but I actually didn’t get a chance to taste it as I was preoccupied with one of the little chefs who inadvertently rubbed his eyes after cutting the jalapeno – ouch!  He was very brave about it, not really making a fuss which must have been hard – I know what it feels like to rub your eyes with chili fingers.  He’s fine, thankfully and I am so sorry he had to learn the hard way but you can bet that all the boys will be busy washing their hands and reminding each other to at the next session!  It’s also a lesson for me – sometimes the boys are so accomplished, both in my class and in cooking club, that I forget how little they are – 9 and 10 year-olds still need to be reminded to wash their hands – just because I remember to, doesn’t mean they will too!  In any case, onwards and upwards, and as I always tell the boys, we learn from our mistakes.