A word about Budapest’s Cafe Culture… a guest post by Fiona Hilliard.

Café culture has been on the go in Budapest since the 17th century. Coffee was first introduced to the city by a Turk named Behram in 1579, when Hungary was under Turkish rule. In those early days, locals referred to the new brew as ‘black soup’ – not the most flattering of descriptions, in fact it kind of makes you picture people slurping it up like savages straight from bowls. By the 1600s, however all and sundry were clearly hooked and coffee shops were springing up all over the city. In no time, they had become sophisticated meeting places that attracted poets, writers and other educated types. They weren’t elitist establishments in any way, shape or form. Mostly, they were frequented by ordinary Joe Soaps, probably more interested in hearing the latest gossip about Gusztáv and Gabriella than discussing the virtues of strong coffee.

Sadly, many of these coffee houses were to become casualties of the various wars that enveloped Hungary. Between bombings and the rise of communism, Budapest’s most popular coffee houses fell into disrepair or were destroyed completely. Fortunately for us, some have been renovated and survive to this day.

Dating back to 1827, Ruszwurm in Buda is the oldest coffee house in the city. 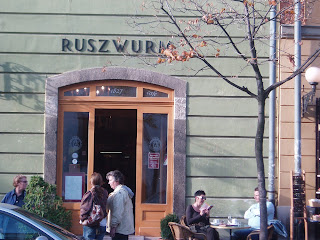 We happened upon Ruszwurm Café after getting lost amongst the lively craft markets and wizened, pea-green walls of Buda (beautiful of course, in their own unconventional way). On first impression, Ruszwurm’s interior reminds you a bit of your grandparents’ living room. It’s warm and cosy. There’s a hat stand in the corner, paintings on the wall and velvet couches line the walls.

After considering the extensive tea menu, we opted for a Jasmine infusion. The tea arrived equipped with its very own entourage of paraphernalia including a complicated looking tea strainer and a handy lemon squeeze that sort of resembled one of those bulldog clips that you’d find in the stationery cupboard. We also got a small pot of honey each and a little square of dark chocolate. 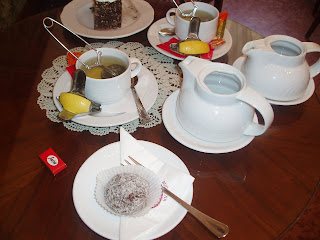 Our cakes were laid out on fancy lace doilies. One was a slice of the famous Esterházy Cake and the other was a chocolate coconut cake. Esterházy Cake is one of the most popular cakes in Hungary, so I had to try it. It originates in Austria and is named after the Esterházy dukes. The oldest recipes tell you to use pastry layers made from almond, whipped egg white and sugar. The cream filling is extra luscious, probably because the cook uses a mixture of egg, cream and vanilla. It’s more common to find walnuts used instead of almonds, and this is how I enjoyed mine.

The built-up layers give a stripy effect, so it’s easy to see why the English translation on the menu was “Castle Cake”. For a cake based on such heavy ingredients, it was surprisingly light and went down well with the herbal tea.

Feeling fortified by the tea and cake, we made our way back to the funicular train that would carry us back down Gellért Hill. But first we marvelled at the view and got some really great photographs: 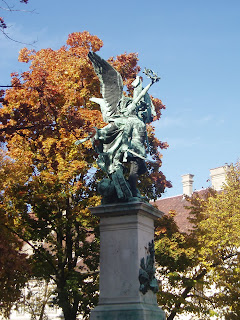 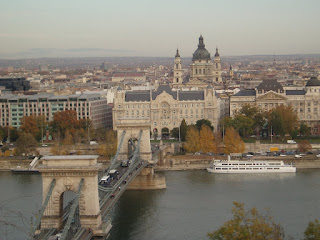 A City of Two Halves

Budapest is a city of two halves, but not in the clichéd travel writer sense of the phrase. It can’t help it. It is literally cut in two by the Danube River. On one side you have the beautiful medieval time warp of Buda, home to the castle, Gellért Hill, and Fishermen’s Bastion, while across the Széchenyi Chain Bridge you have the industrial and business heartland of Pest.

Later back in Pest, after dinner, we thought we’d take it easy on dessert and ordered two winterberry mousses on Liszt Ferenc Square. They were all out apparently, but the waiter twisted our arm on getting chocolate brownies instead.

What we got were two pieces of chocolate cake – posing as brownies –slices of cake of monstrous proportions, served with a caramel crisp, a huge dollop of cream and caramel sauce. There was even a wafer straw on the side…no wonder the waiter had a glint in his eye! 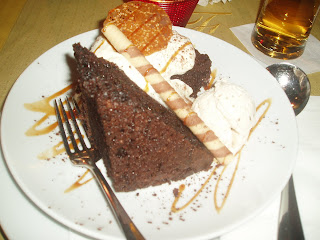