pick up your game!

Ok so am safely in Sydney (Australia, as they kept on reminding us on the plane every time they mentioned it – I guess some people have found themselves in Sydney, Nova Scotia by accident…) and am reflecting on my Toronto-Vancouver-Sydney flight. Awesome in theory (i.e. less security hassles as you get to bypass my least favourite airport in the world, LAX) but in reality, just so-so.

First of all, even though the flight is international, you check in and wait in Toronto’s domestic terminal. NO DUTY FREE!!!!!

Secondly, because even though the flight is international, Air Canada have cunningly decided that the Toronto-Vancouver portion is “domestic” therefore avoiding having to serve a meal. It’s close to FIVE HOURS for goodness sakes and it leaves at 8.30pm.

Thirdly, when you arrive in Vancouver, you have to deplane, even though you will be taking the same plane again in less than an hour (fair enough, I guess with security concerns etc..) but then you find yourself in a teeny tiny lounge in YVR where the duty free shop does not sell any champagne or the particular Clinique blusher that you want….

At this point, I was NOT a happy camper but re-boarded the plane looking forward to my special meal (I always order low fat meals to avoid what used to happen on long haul flights – the post-travel bloat where you would roll off the plane having eaten every couple of hours food that you didn’t need since you were, well, sitting still… Nowadays it’s not so much a problem since the food is scarce but I still like to be served first!).

Lo and behold, I have a total déjà vu experience: 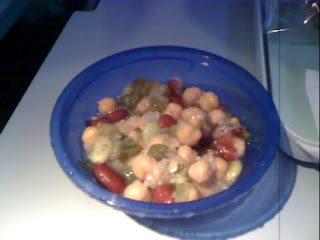 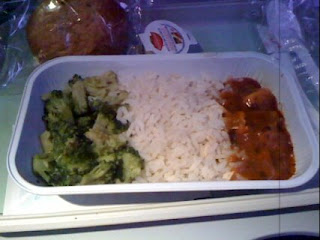 As I am eating this, I am thinking it looks and tastes very familiar. I get out my laptop later on to find these photos from two summers ago: 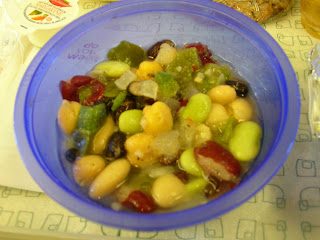 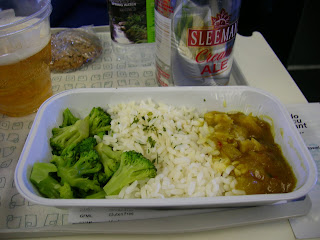 (what they called) Pineapple chicken curry.

I will be interested to check out some of the in flight “service” in the coming weeks on Qantas, and Thai Airways…

Ah – flying, it’s definitely not the glamourous past time it used to be…