Skip to content
A grey Monday presented us with a couple of options – shopping or perhaps venturing further afar. Since this was supposed to be the “budget” version of a week in New York (Hmm, now I seem to have forgotten to mention those shoes I bought on Sunday, right – but reduced from $175 to $49 so that counts as a bargain, right?), we decided to go to Coney Island. In the few years we have been coming to New York on a semi-regular basis, we have never been.
We knew that not much would be happening on a Monday in May but that suited us just fine. We would never have thought to go there in the summer when it’s throngs of people…

A 40ish minute ride on the subway put us in Russia Brighton Beach. Wow, this was quite the culture shock, like going back 30 years in time… I think the only English we heard was our own! Very cool little area to poke around and purchase mystery food items (we bought what we thought were cookies and chocolates for our neighbour who was looking after Cleo Mimi, since he actually reads and speaks Russian and he thoroughly enjoyed them!). 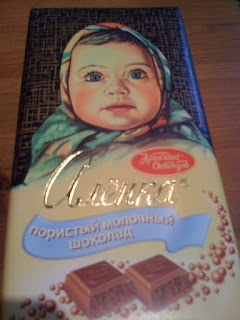 Next, onto Coney Island. We walked the short distance along the boardwalk, pretty deserted but expected since it was Monday lunchtime.. There were some school groups there – what a cool field trip! – but mostly it was empty. At the end of the boardwalk, we happened upon Nathan’s Famous! (well I knew that was THE place to go for lunch so I steered us in that direction!) 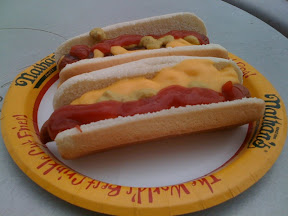 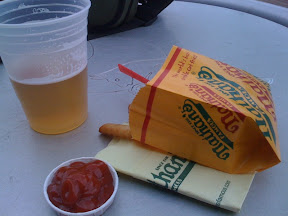 Crinkle cut fries and a beer!