Yes, yes, yes, I am getting to the Mexican food posts. Soon.  I’m actually looking at recreating some of the treats we enjoyed on our vacation, with a little help from CSN stores…  I am trying to decide on a product to review and much as I would like to order some props for my blog or you know, even some home bar furniture (LOL!), I think I might go for something to help me in my “recreate a little piece of Mexico”. Stay tuned.

It’s no secret to most of our friends that Neil is a hoarder. Of stuff. We have a basement. It’s full of stuff. When I moved to Canada nearly 11 years ago, I had to pack up my little life in Paris and fit it into 10 packing cartons. Can I just say, I am not surprised Neil has lived in our house most of his adult life. There’s no way he would be able to fit his stuff into 10 boxes. Or even 100.

However, living with a hoarder does have its bonuses. Every time we go on a trip, Neil will produce a folder of stuff articles he has been saving from various magazines and newspapers (can I just add here that we should not be allowed to subscribe to any more magazines. Ever. My reading material on our trip to Mexico consisted of 10 magazines I had to catch up on. Food and wine related, of course but still, TEN! Yoikes!) and even if some of the restaurants and bars might not be around still (because there does not seem to be a limit on how long these articles are kept for), we’ve been lucky enough to find some gems of places. All because of Neil’s piles files of stuff.

Ever since I have known Neil, he’s been going on about the Monarch butterflies. About their winter home in Mexico. And planning a trip to see them. And yes, there’s a file. Because Neil has been planning this trip since 1976. Yup, when he was 9… Because he read this: 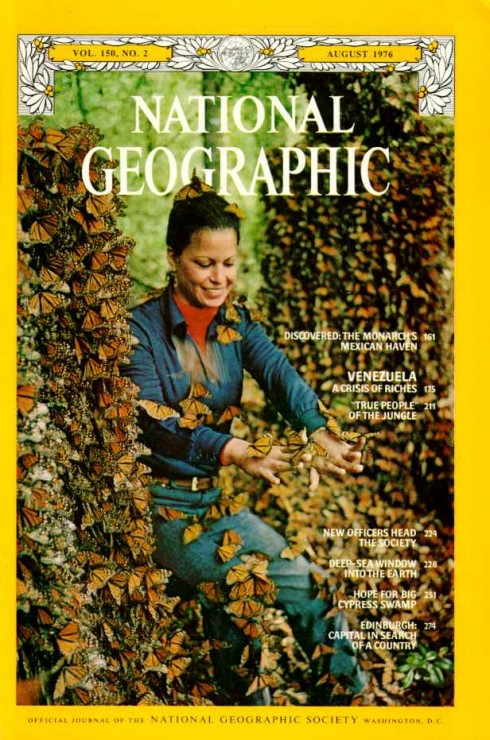 The cover story was written by Dr. Fred A. Urquhart (1911- 2003) – a Canadian zoologist who spent much of his life studying the ecology, and especially the migration, of the Monarch butterfly.  Dr Urquhart was experimenting with tagging butterflies as early as 1937, attempting to follow the migratory patterns of the Monarchs.  In 1975, Dr. Urquhart determined the winter home of some groups of monarchs – in the trans volcanic mountains of Mexico and wrote the National Geographic article in 1976.

Neil, being, well, Neil, wrote a letter to Dr Urquhart after reading the magazine. I asked him why.

“Why WOULDN’T I write to him?  It was an amazing discovery, and when I realized he was in Toronto (Neil lived in Niagara on the Lake at the time) so heck it was “sort of” local versus some PhD from Lord-knows-where in the world), it seemed prudent to write.  I wanted to find out info about the possibility of getting involved with research, how he did his research, and how I could visit the secret site.  At the time I was thinking of working in the animal kingdom…”

Well Neil didn’t end up working in the animal kingdom but finally, 33 years later, we made it down to the state of Michoacán to the winter home of the butterflies. I had a mission: My Grade 3s had participated in the Journey North project this year (where students help track the monarch butterfly migration each fall and spring as the butterflies travel to and from Mexico. reporting their own observations of migrating butterflies to real-time migration maps) and I was charged with “finding Creepy”. Creepy being one of the butterflies they raised from caterpillar to butterfly.

The Monarch butterfly, one of the best known in North America, is a distinctive-looking orange and black milkweed butterfly.  The Monarchs are famous for their migration to the south during the northern hemisphere’s winter and their return to the northern part of the continent (spanning three or four generations of butterfly) in the spring.  No single individual makes the entire round trip as the female monarchs deposit eggs for the next generation during these migrations. 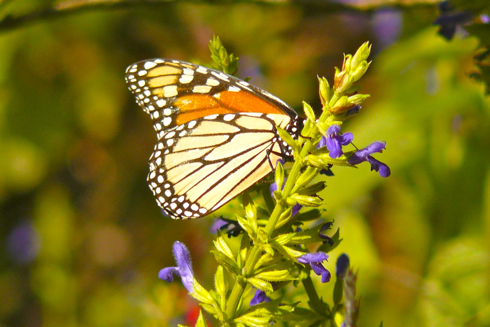 The Monarch population east of the Rocky Mountains migrates to the sanctuaries (reserves) of the Mariposa Monarca Biosphere Reserve, located in the Mexican states of Michoacán and México and the second, third and fourth generations return to the northern United Stated and Canada in the spring.  It is fascinating that the butterflies return to the same winter location year after year, over several generations and this is still a subject of research.  It appears that the flight patterns are inherited and are based on a combination of the butterflies’ own inner compass and the position of the sun in the sky.  New research has also shown that the Monarchs use the earth’s magnetic field to help them navigate.

For our couple of days down in Morelia, we took a tour from MichMexGuides. We figured we didn’t really want to be driving a rental car around parts unknown and why not have an English speaking guide to help us learn as much as we could?  It turned out we were the only people on both the Monarch and the Patzcuaro tour, fortunate for us but a very depressing nod to the sad state of tourism in Mexico at the moment. 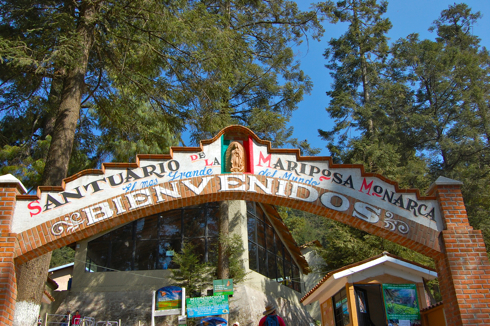 It certainly is a magical place. It’s in the middle of nowhere. As in, a 3+ hour drive from the town of Morelia, then, depending on which reserve you visit, a short hike (um… at altitude so it feels like it’s much farther).  As you approach the area, you start to see butterflies. Just one or two. You start to get excited. But your guide tells you there will be plenty of opportunity for photos soon. And he is not wrong.  In situations like this you have to thank god for digital cameras.  I remember when Neil and I went to the Galapagos before either of us had a digital camera and we took rolls and rolls of film. There was just so much wildlife there, everywhere, yet you felt like you had to take photos of everything. It was slightly ridiculous.  Even on this trip, far more photos were taken than were actually needed. Because you know butterflies are pesky little things. They move. All the time. So if you are used to taking photos of food that does not move, they are tricky to capture on film.  Neil and I did what we could. And Carlos was amazed at how many photos we took.  I understand enough Spanish to have caught that when he told the local guide.  They all thought it was funny. But you know, I probably won’t ever be back there. Had to capture the moment. Or at least try.

First you see a few of them… 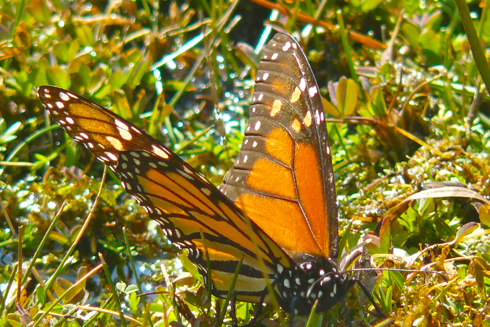 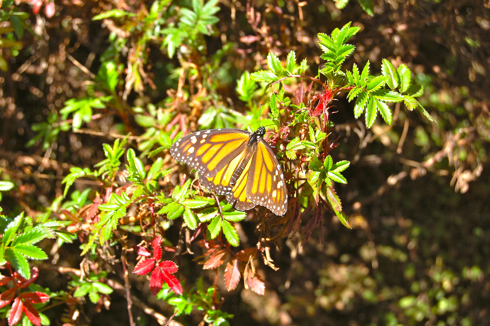 Then a few more… 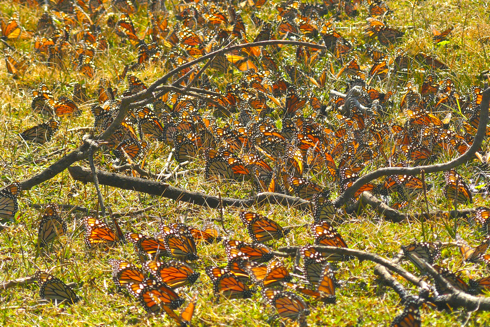 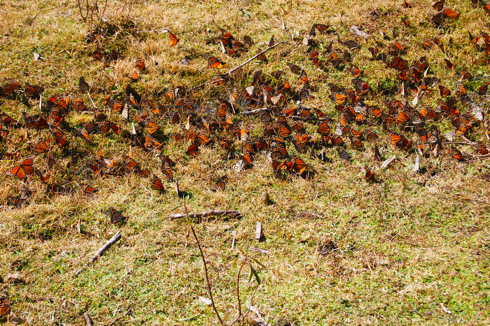 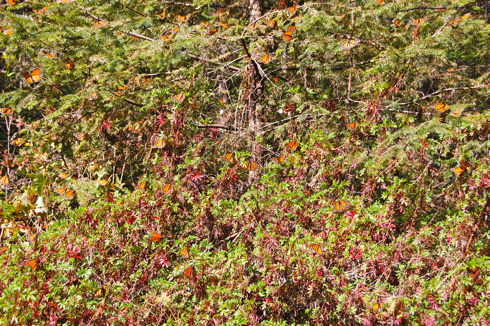 And then you look up… 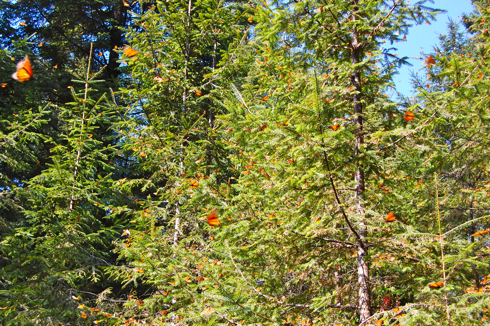 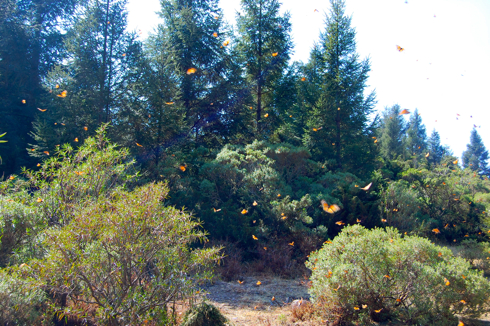 At the end of the trail you see an area that’s roped off.  Look closely… 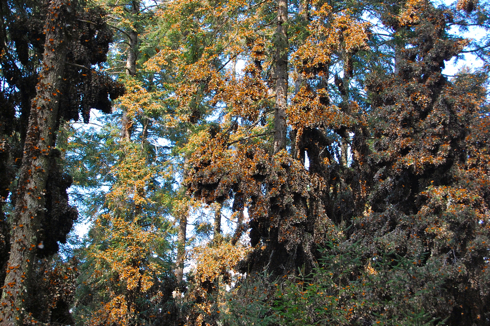 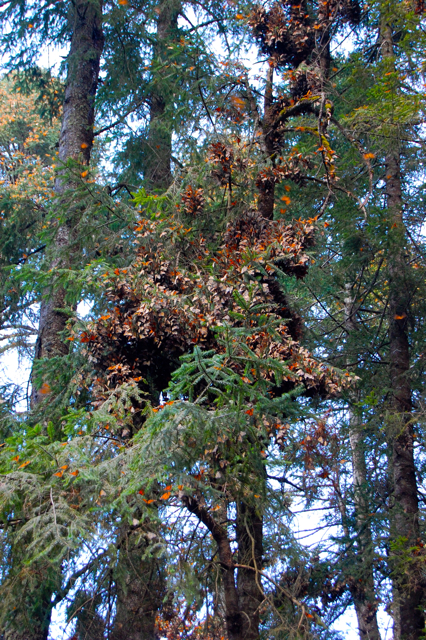 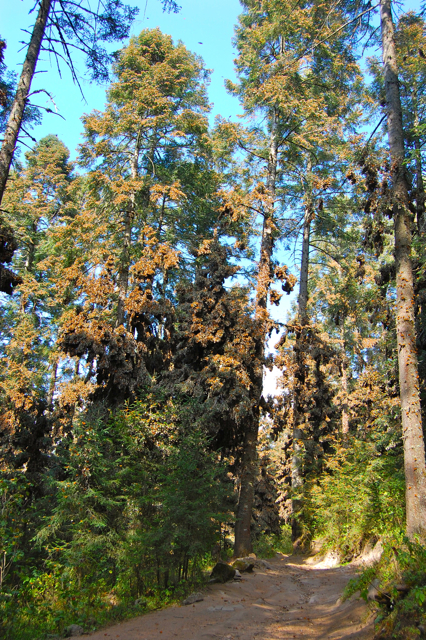 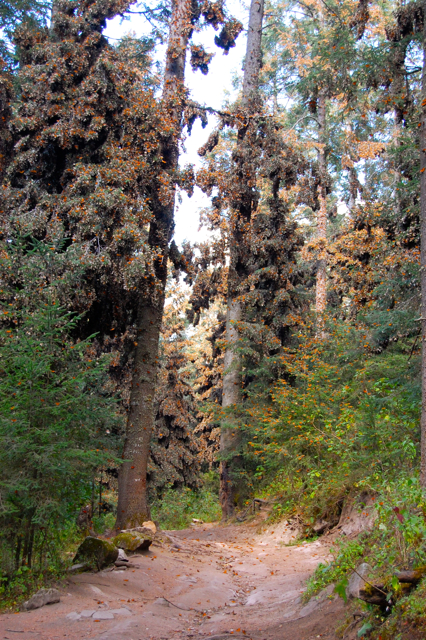 Yeah, those orange things are butterflies…

And no, we didn’t find Creepy.

If you ever get a chance to visit this magical place, don’t hesitate. It’s like a real-life Disneyland.

Of course, traipsing up and down hills at altitude makes one a little peckish.  We were pleased to be able to spend some pesos and eat at one of the few (and fewer and fewer, given the decline in tourism to the area) food stands on the way back down to the car.  We’d already eaten a little snack on our way up but Carlos our guide did not recommend climbing at altitude on a full stomach so we had a simple empañada and ordered our lunch for later on.

We arrived to a cold beer and this: 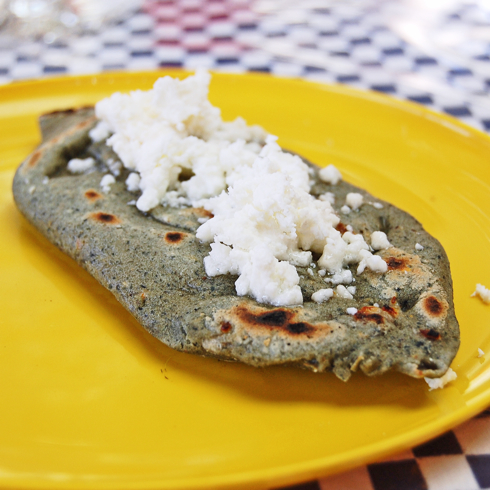 A blue corn tortilla with some chicken, veggies and cheese, topped with a goat-like cheese. Delicious. I mean, I could have just eaten a bunch of those.  Loved these rustic beauties – so different from the perfect tortillas and quesadillas you get in restaurants here.

As we ate, we watched our chef preparing nopale to fry up… 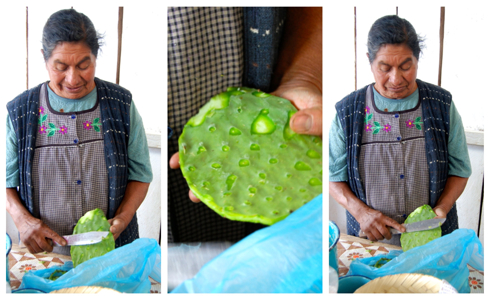 According to Food.com, nopale are “the fleshy oval leaves of the nopal (prickly pear) cactus and are also called cactus paddles or pads. Nopales range in color from pale to dark green and have a delicate, slightly tart green-bean flavor. The flesh is generally cut into small pieces or strips, simmered in water until tender and used in a variety of dishes from scrambled eggs to salads.” 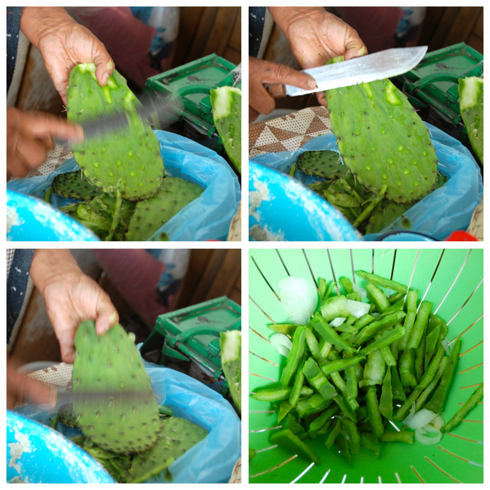 We were served a traditional chicken mole and a side dish of white beans (the most common beans served in Mexico, we found, hardly anywhere did we come across black beans or red kidney beans) and a rice dish made from white rice, tomatoes, garlic and onions.  Sometimes known as “Spanish rice” this side dish is not known in Spain and the term is not used in Mexico where it is usually simply referred to as arroz. 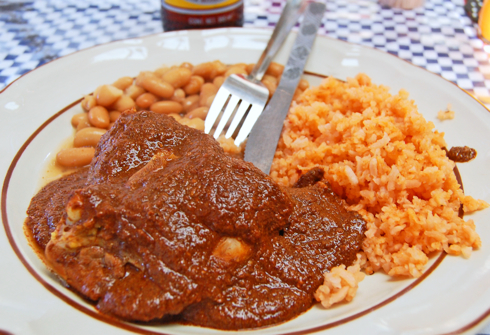 No, Mexican food is not the most attractive to photograph but boy was it tasty!

But look at the nopales: 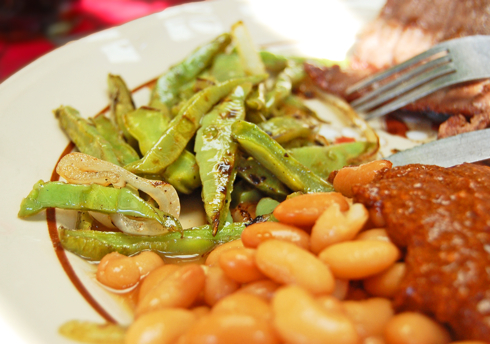 These were so different – loved the texture, slightly crisp but kind of gluey and slimy (not in a bad way but that’s the only way I can think of to describe it!). I am fairly certain that we can buy these in Toronto, so will definitely have to give it a go for a Mexican-themed dinner party!

Don’t forget to enter my Tassimo T20 giveaway!  Open to US and Canadian addresses only.  Details here.