On any given chilly Tuesday night in the middle of January, you are most likely to find me at home, safely in my PJs after yoga. She who gets up at 5.30am because she is so slow to get going in the morning and she who must be functional in front of her classes before 8am really needs her beauty sleep you know…

There are a few places I will make exceptions for and last Tuesday, Neil’s Rotary club restaurant group met at one of them – a new-ish restaurant in our neighbourhood, The Local Kitchen and Wine Bar. 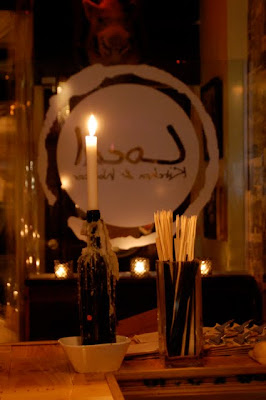 Owned and operated by lifelong friends Fabio Bondi (who mans the kitchen) and Michael Sangregorio (at front of house), the restaurant opened last year in what many might think was a crazy time to open a new restaurant on a strip of Queen Street West that doesn’t quite make it into the boundaries of Roncesvalles, thus relegating it to the neighbouring and much less chic Parkdale ‘hood. But Bondi and Sangregorio’s strategy – good locally-sourced food at reasonable prices in an intimate atmosphere – has succeeded in a big way. 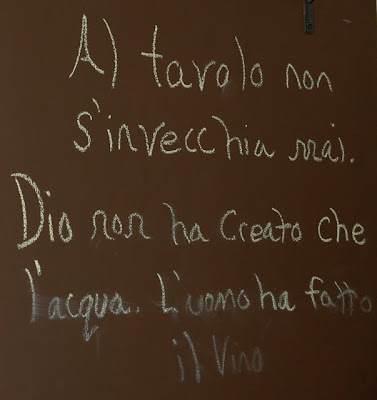 Our first experience at the Local Kitchen was in early October, not long after they opened. They were full and turning people away or having them wait at the tiny bar for tables. We took a friend for her birthday and invited some foodie friends and some neighbours. Everyone was totally blown away by the food but what struck us all was just how “homey” the place was. In fact, sitting there that night, chatting with Michael about the restaurant’s home cured meats and swapping stories about our bacon and pancetta that we did for the BLT challenge and, later, singing along to some 1980s Boy George song, someone remarked that “it was just like being at Mardi and Neil’s” (obviously with better food!). 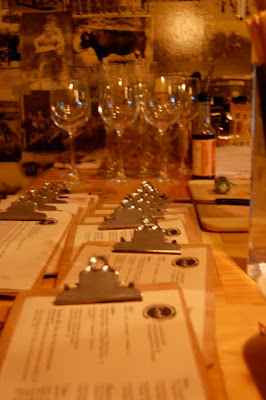 A restaurant that makes you feel that at home is a special one, that’s for sure. Michael invited Neil to spend an afternoon “helping” in the kitchen and learning how to make their home made pasta; an offer which he accepted a few weeks later and had a blast being chastised for his sub-standard mezze lune! Subsequent visits continued to impress us and friends followed our recommendation and recommended it to their friends etc. Everyone I know who has been there absolutely loves the place – raving about the food and the atmosphere. 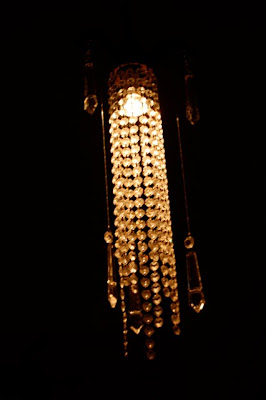 Michael and Fabio pledge to “source and provide quality food grown by local farmers using sustainable methods” highlighting seasonal ingredients and local Ontario wines. So when Neil’s restaurant group were looking for something a little different from the usual ethnic-themed restaurants, we knew we had to bring them here. The tiny 29-seater restaurant is definitely “cosy” when it’s full with a wait list (they don’t take reservations unless it’s a party of 6 or more and you agree to a prix fixe “Chef’s table” menu). But the intimacy really makes the experience and as I sat at the salumi station where Fabio prepares the cheese and charcuterie plates, I observed people ambling about the restaurant, completely at home, and thought to myself “Yup, it’s just like having them all over to dinner at our house – with better food, of course.” 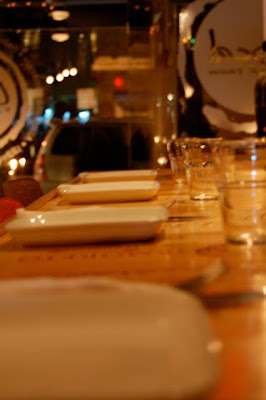 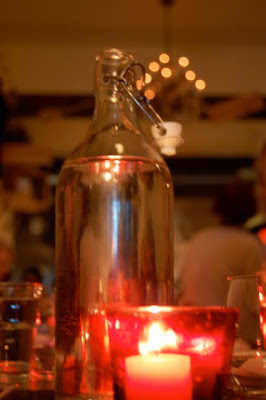 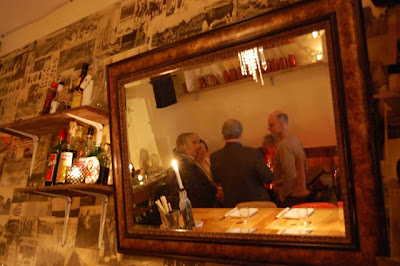 There are some special touches which really make the place fun though. The proscuitto hanging from the ceiling… 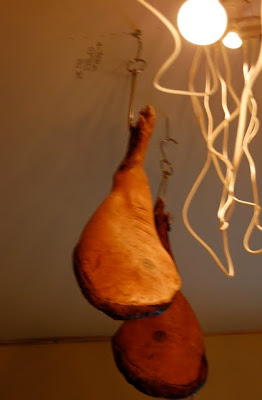 to the very very excellent washroom 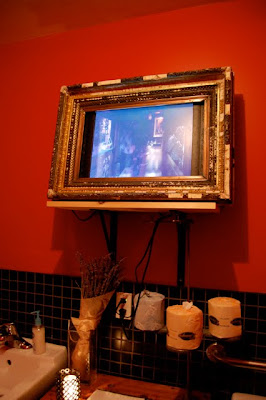 What’s that, you ask? A TV on the wall? What on EARTH would you play in the washroom of a restaurant and a wine bar? 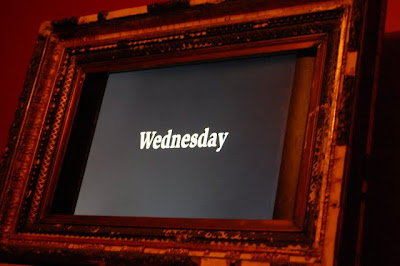 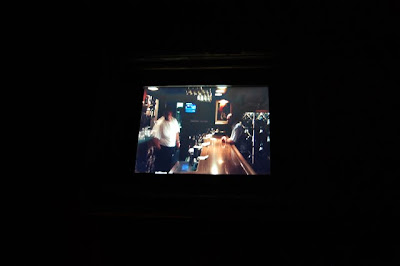 Why, Sideways, of course! So much fun! But with just one washroom, you are going to have to hope that you are not in the queue behind a film buff if you really need to go! And yes, I did take my camera into the washroom…

Ok, ok, enough of the preamble – what about the FOOD??? As I sipped a Mill Street Organic Lager (from a Mason Jar – how cool is that?) and munched on some wonderful olive-oil toasted bread, I perused our menu for the evening. 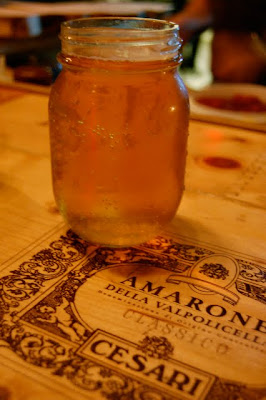 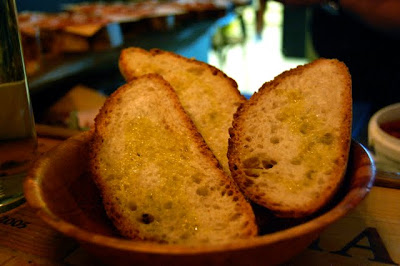 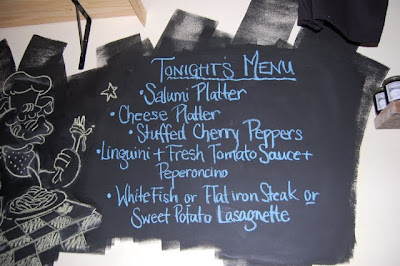 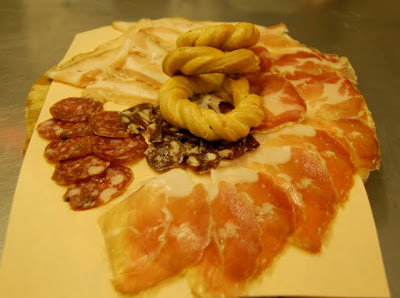 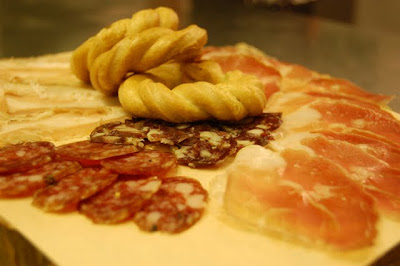 Selection of house-made salumi, including wild boar and elk sauscisson and a wonderful maple smoked prosciutto that melted in your mouth. So buttery and smooth that you could have spread it on bread… 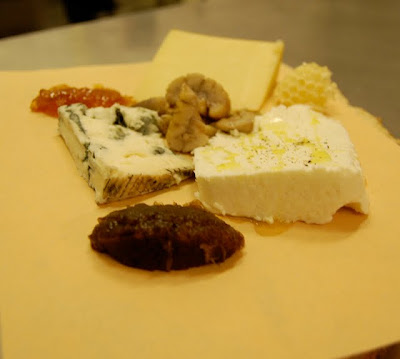 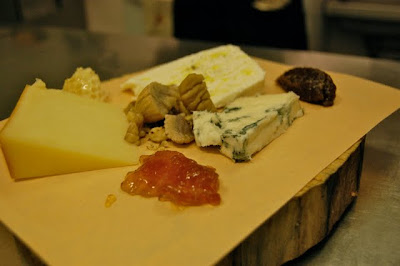 Selection of local cheeses. This included an Applewood smoked cheddar, a gorgonzola and a ricotta salata. Served with honeycomb, a marmalade, chestnuts and an apple and date paste. If I had had to leave at this point, I would have been completely satisfied. My idea of heaven. 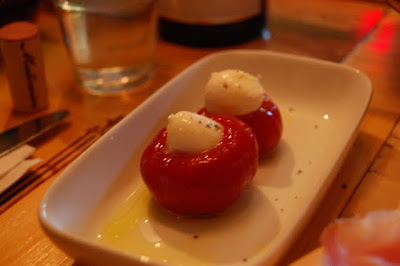 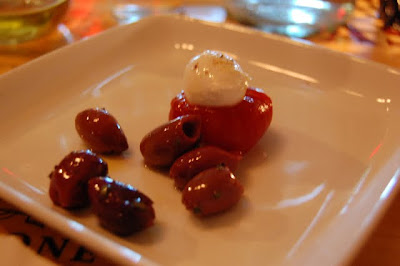 Spicy cherry peppers stuffed with bocconcini and some rosemary-marinated olives. 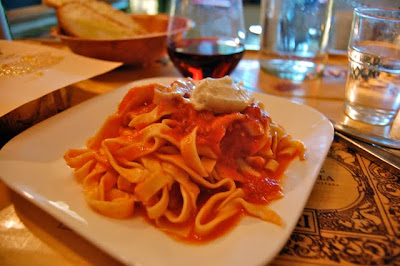 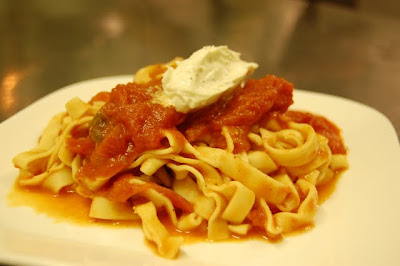 House-made linguini with fresh tomatoes (from the garden) with pepperoncini, basil and parmigiano. This was so simple yet so perfect. Fresh ingredients and clean flavours. This was a large portion and I have to admit I couldn’t eat all of this so Fabio kindly provided myself and my dining mate at the salumi station with a takeout box which we continued to sneak things into throughout the rest of the meal. Made for a very fancy lunch the following day! Looking around at the rest of the tables, I saw most people had not had trouble finishing it. The beauty of the Local Kitchen is that most of the serving sizes are very small which means that you can get a taste of a lot of different things, especially if you are there with a few people. 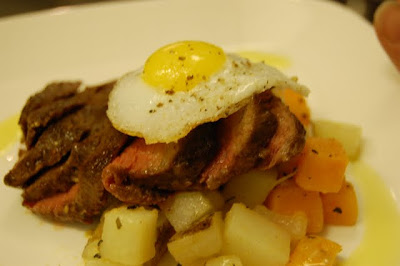 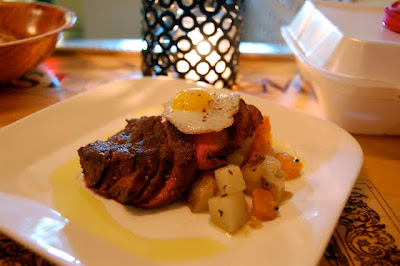 Kerr Farms flatiron with quail egg, patatini and tarragon. A lovely little bite of steak served over tasty little cubed potatoes (and some root vegetables?) with a perfectly fried quail egg on top. Beautiful to look at and most certainly the classiest steak and egg dish I have ever tried! 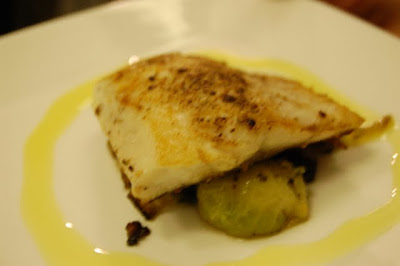 Wild Ontario whitefish with brussels sprouts and guanciale. Neil’s choice and one he was extremely happy with. I know many people might think white fish sounds boring but the vegetables (and guanciale – how could you go wrong with that?) married beautifully with the delicate flavour of the fish. Crispy on the outside and wonderfully flaky on the inside, it was cooked perfectly. Please excuse the blurry photo – the ONLY picture I did not take myself all night… 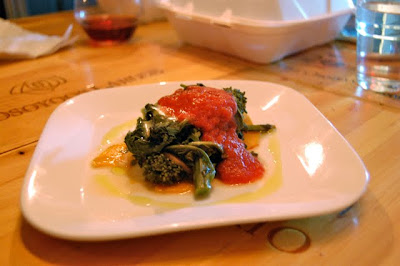 Sweet potato lasagnetta with tellegio, rapini and pomodori. I didn’t try this but it looked wonderful and was consumed with rave reviews by my salumi bar seatmate. Other vegetarian options I have tried in the past have been extremely tasty, so much so that meat-loving Neil has tasted them and not even missed the meat (that is saying something!) and this one appeared to be no exception. Again, clean plates abounded. 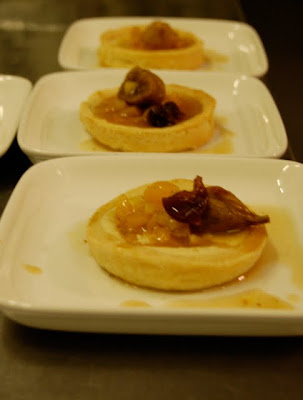 Ricotta tart with dried fruit compote. The only “average” part of the meal. Perhaps because we didn’t really need any dessert after such a complete meal, but this wasn’t the best choice, I felt – a little on the heavy side. The tart crust was a little too thick to be able to easily cut with your spoon and I wonder if it might have been much better sans crust (so just the ricotta with the fruit and syrup). The fact that I didn’t feel the need for dessert (on either this or previous visits), is a strong statement, coming from the person who usually reads the dessert menu before I choose my main course! Desserts at the Local Kitchen are not made in house and in my opinion, not quite up to the very high standards of the rest of the menu; however, this is a place you go for dinner, not dessert.

If you live in, or are visiting, Toronto and you haven’t been yet, run, don’t walk to the Local Kitchen. Most definitely worth pulling yourself away from your couch and your PJs on a cold mid-week evening for! With consistently excellent meals, it’s only going to get busier and more difficult to nab a table. If you’re looking for great food, an intimate yet relaxed atmosphere and a fun sound track, noone does it better than these guys.

27 thoughts on “The Local Kitchen (Toronto)”