Whilst we were in Montréal last month, we were excited to see an interesting sounding exhibit on just around the corner from Olive et Gourmando. 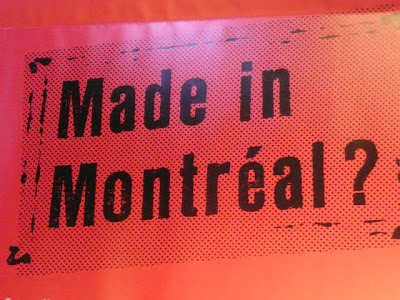 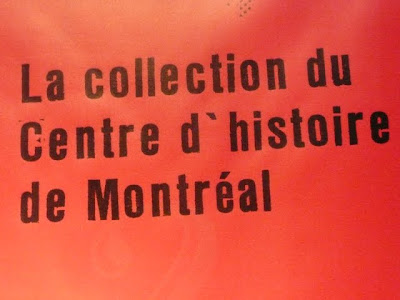 So what’s this all about then? 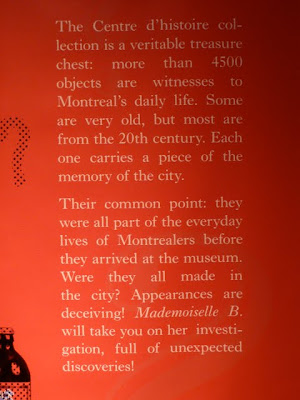 Sounds intriguing, huh? Made in Montréal was a really well thought-out exhibit, put on by the Centre d’histoire.

We had a fun “ride” on an old streetcar: 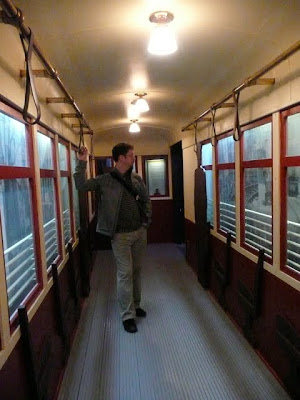 There were some signs of the times: 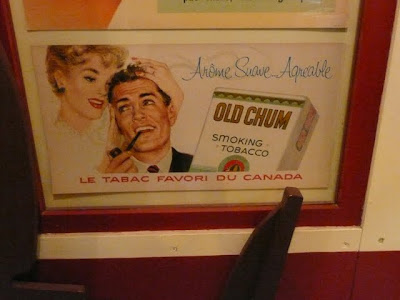 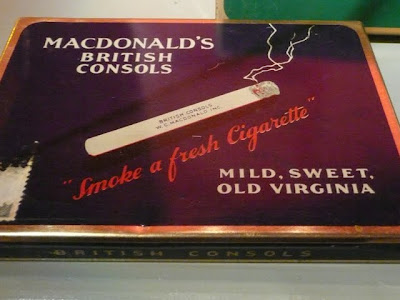 Now there’s quite the oxymoron!!!

Of course, I focused mainly on the food and drink objects on display there. 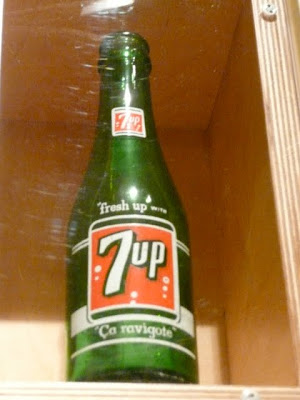 This 7up bottle was made at the Town of Mount Royal Factory. The brand was commercialized in 1929 in St Louis, Missouri. Now it’s made by Dr Pepper Snapple Group in the USA and by Pepsico in the rest of the world.

Strange factoid: The original version of 7up contained lithium citrate, a chemical substance used today to treat bipolar disorder patients during manic episodes. 7up was advertised as a medicinal drink as it was supposed to be a good hangover remedy. Lithium citrate was removed from the formula in 1950. 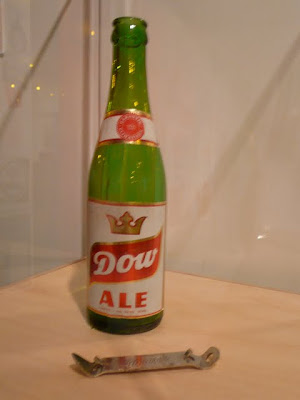 I had never heard of Dow Beer. Apparently it was first sold in 1818 by the Dow and Dunn Brewery Company. It became a favourite of Québec beer drinkers, however, in March 1966, the suspicious deaths of several (between 16 and 40) Quebeckers was linked to their high consumption of Dow Beer. The government began an inquiry but the company panicked and got rid of some 500 000 litres of the product. Consumers were not reassured, however and the company was taken over in 1967 but the O’Keefe Brewery and Dow Beer has never been seen again. Until this day, the company’s responsibility for the deaths has not been established.

Interesting factoid: In business schools, the Dow beer scandal is still cited as being how NOT to handle a crisis! 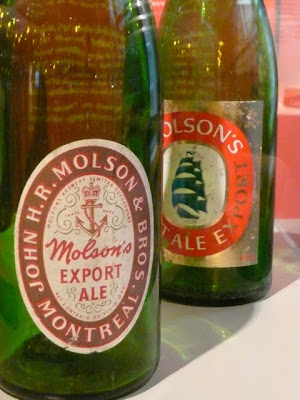 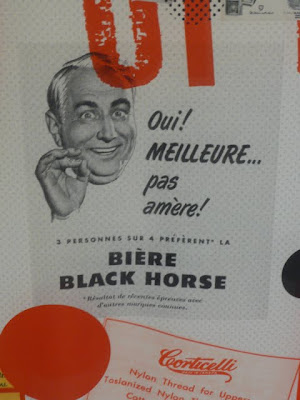 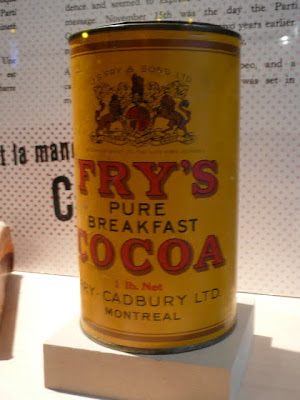 The Cadbury Factory opened in 1924 in Montreal. 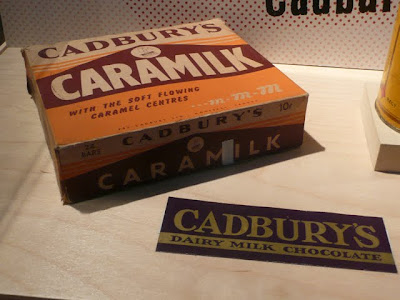 The Cadbury chocolate bar factory was located in Montréal until 1978, when they announced a shift to Ontario. The company blamed the move, and subsequent loss of about 500 jobs, on lack of demand, however, two years earlier to the day of the announcement, the Parti Québecois was voted into power, making Québec sovereignty a real possibility and many thought the choice of date seemed to express a clear political message.

A wave of protest swept through Québec and a campaign to boycott Cadbury products was set in motion with the slogan “Bar Cadbury!” 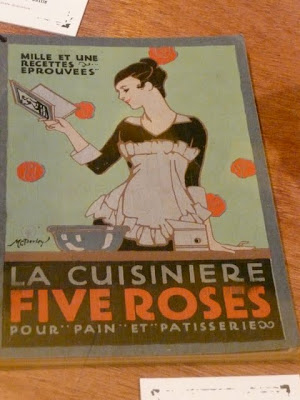 Love the Five Roses flour cookbooks on display! Also love that it’s for “bread” and “pastry”. Not sure about those quote marks… Farine Five Roses is indeed, a Montréal landmark:

The Farine Five Roses sign is unlikely to remain a feature of the Montréal skyline for much longer, even though it has been around in some form since 1948. In mid-July 2006, the sign was turned off – seemingly permanently – as a direct result of ADM’s sale of the Farine Five Roses brand to Smuckers. (Since ADM no longer owned the brand, the sign on the roof of its mill had become an irrelevance.) In mid-August of that year, the sign was turned back on amid adverse media coverage and public outcry. It seems more important than ever to think about the sign’s incredible history, since its days are indeed numbered.

In 1946, Ogilvie Flour Mills Co. Ltd. opened the New Royal Mill in Montréal. A photograph from 1948 shows the rooftop sign at the time of installation reading ‘FARINE OGILVIE FLOUR’ on three lines. After Ogilvie purchased Lake of the Wood Milling, in 1954, the sign was changed to ‘FARINE FIVE ROSES FLOUR’. In 1993-1994, the entire business was bought by Archer Daniels Midland Company (ADM). The Quiet Revolution resulted in sweeping legislation that established the primacy of the French language in all forms of public communication, including signage. This led directly to the removal of the word ‘FLOUR’ from the sign in 1977. 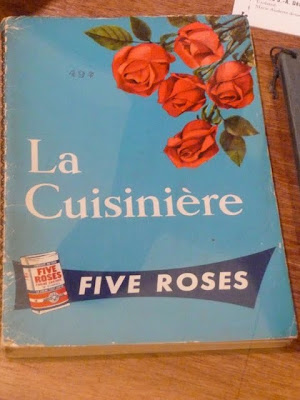 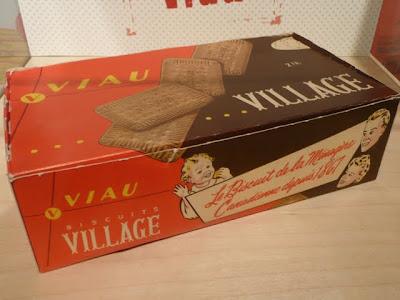 Neil had never heard of this company either, so I Googled and found this:

In 1867, Charles-Théodore Viau and Toussaint Dufresne founded a bakery that made bread and cookies in Montréal’s Sainte-Marie district. In 1870, Viau parted ways with Dufresne and partnered with Michel Viger, whom he bought out three years later. This marked the creation of Viau et Frère. In 1890, Viau stopped making bread to focus on cookies, candy, and chocolate. At the time, his cookie plant was the largest in Canada. In 1969, Corporation des Biscuits Viau was acquired by Imasco Foods, which itself was bought out by Culinar in 1983. In 2001 the Ontario agrifood company Dare purchased Culinar’s cookie-making business. It closed the Viau factory in 2003. 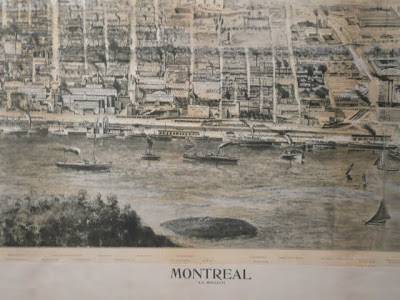 Totally worthwhile if you are ever in Montréal (or if you live there – Ann – I am talking to you!!).

8 thoughts on “Made in Montréal”