Australian Gourmet Traveller has named MoVida “the best Spanish restaurant in the country.”

The Age Good Food Guide says: “A true destination restaurant – you may overhear international diners who’ve made it a centrepiece of their visit, or see foodies brandishing copies of the restaurant’s eponymous book for chef Frank Camorra to sign – the place delights those who live to eat.” 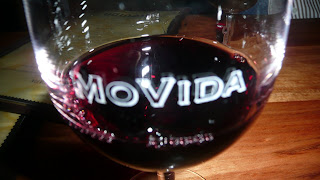 My friend booked our table about 6 months ago so we were lucky enough to score the coveted 8.30pm seating (meaning we wouldn’t be asked to vacate our table for a new crew of diners).

It certainly is not somewhere I would have stumbled upon by myself. It’s down a little laneway (isn’t everything in Melbourne?) 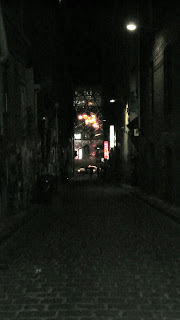 (as an aside, there is a great bar next door called Misty where we had an agreeable glass of Spanish cava whilst we waited for our table to be ready). 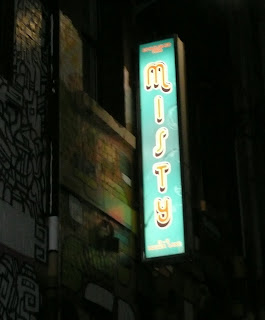 MoVida itself is a bustling little restaurant with a pleasant buzz which increased as the night – and bottles consumed! – progressed (though we were fortunate enough to be sitting in the booth – cheers to Ann for booking so far in advance! – where we were shielded from most of the noise).

The menu is not excessively long (though long enough that there was some dithering and indecisiveness amongst our small party of three because everything looked so tempting). You can view the current menu here. We were advised to order three tapa each and five raciones between us. Sounds like a lot, huh? Well I would say it was spot on (but then the desserts put us over the edge…). 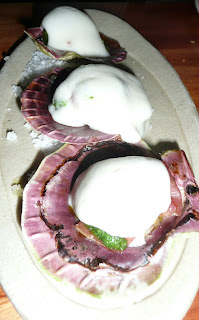 The photo is a little over exposed and makes the foam look a little like a thick sauce which it wasn’t. The scallop was plump and juicy – loved it. The foam… well I am still not convinced about foams, they look a bit spit-like for my taste. Give me a buttery sauce any day. Not that I am complaining too much – I guess I am just a little over the foam craze… 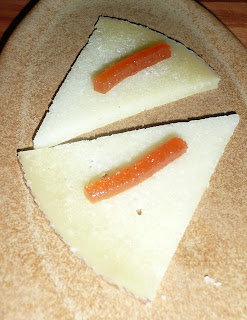 What can I say? Salty and sweet, cheese and fruit – one of my favourite combinations… 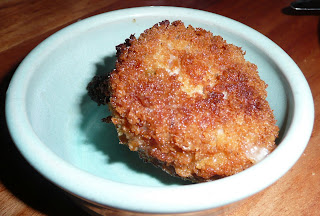 Now we all had a little bit of a laugh at this as it was rather KFC-esque in its appearance. However the crunchy coating gave way to moist quail meat and all thoughts of the Colonel disappeared…. 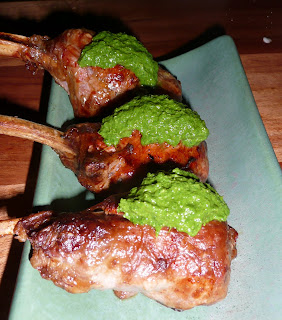 Now some people don’t like lamb. I put them in the same category as those who can’t stomach chocolate or coffee – there’s clearly something not quite right there.. This lamb was perfectly pink on the inside – a lovely colour combination with the minty-pesto-y accompanying sauce. 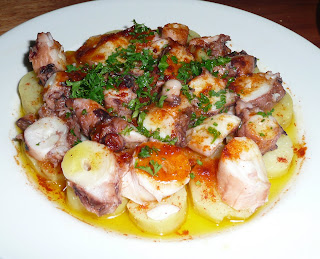 Pulpo a la gallega 16.00 Octopus cooked in the Galician manner, with kipfler potatoes and paprika

For me the highlight was actually the kipfler potatoes (known as fingerling potatoes in Canada), one of the many varieties of potatoes I got so excited about at Adelaide market last week. Bite-sized mouthfuls of buttery deliciousness. The octopus was pretty nice too… 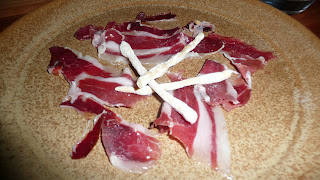 This was amazing but $20 for 20 grams???? I am in the wrong business my friends. Perhaps after Neil’s made the bacon and pancetta he can attempt a prosciutto??? 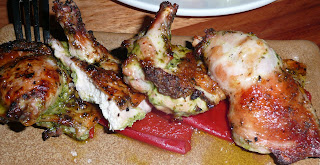 This was a special of the night – a spatchcock (or poussin, depending where you are from). This was so delicious I could have eaten the whole thing myself. In fact, by this stage of the meal, we were all in a bit of food delirium to the point where I can’t remember the preparation though typically spatchcock is grilled or roasted. I’m pretty sure it was roasted and served on roasted red capsicum (peppers for my North American friends). 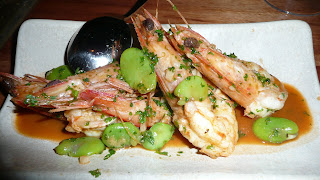 These were Gambas al ajillo but I can’t seem to find them on the current menu… Served with a garlicky sauce and broad beans. Mmmmm… 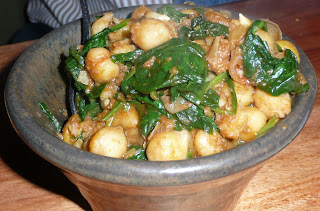 We thought we had better have some vegetables. These were more Indian inspired than Spanish but something I would like to eat everyday….

Postres (which we totally did not need but anyway…) 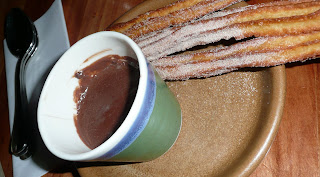 Oh. My. Goodness. Rich molten chocolate. Warm churros, crunchy on the outside and spongey on the inside. Need I say more? 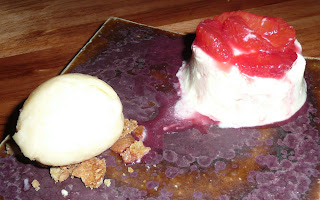 This was a little bit like a panna cotta, mandarin flavoured, I believe, served with vanilla ice-cream. It was a special of the day and when it was described we said “done” in unison. Hence the no name.

A wonderful night was had by all – thanks to Ann and Paul for fabulous company, great food and wine.