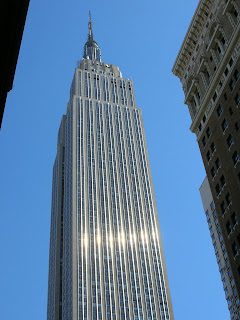 It’s good to know that a weekend in New York City does not have to cost an arm and a leg. I decided to log our (necessary) expenses from our Victoria Day trip to the Big Apple, just to see if you could “do” New York on the cheap without living like a backpacker (‘cos let’s face it, neither Neil nor I are getting any younger!).

Airfare:
Way back in May 2008, we purchased an Air Canada flight pass each. This meant buying two return flights to New York each at a total cost of about $1000.

Hotel:
We have stayed for the past few trips at the Hotel 31, a wonderfully quaint hotel on Park Ave South at 31st. Rooms there go for about $120US a night but this is with a shared bathroom. The hotel does have rooms with private bathrooms but we ave never stayed in one since we have never actually seen the other people we were “sharing” with. The 31 does not offer breakfast (even at a cost) or wifi, both of which would have been nice to have in the past – certainly small luxuries but ones which are becoming more and more common, therefore less “luxurious”… It’s a great spot and good to know about but this time, I thought we should branch out and try something a little different.

I spent a while (ok, like a really long while) online looking for reasonably (i.e. under $150US/night) hotels. This proved to be fairly challenging (and time consuming!) but I finally came up with the Ramada Eastside, right around the corner from the 31. I will be honest here and admit that one of the attractions of this hotel was that it offered Aeroplan points and since I am on the quest to earn as many as I can in the next year or so to be able to continue reward travel, it sounded perfect. Trip Advisor reviews were also favourable which helped seal the deal.

Sooooo happy with this hotel. You can read my review here.

And ok, let’s be honest here, Neil and I took two cabs over the course of the weekend. ($5 and $7 respectively) It was raining hard Saturday night and then Sunday night, well we were just tired (and not as young as we used to be!)

The next couple of posts will explain how we spent the weekend and, in fact, what we spent.