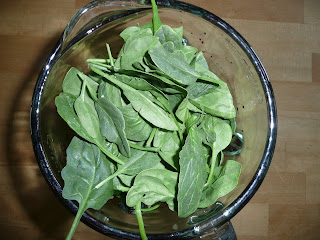 It’s green. You mum told you it’s good for you. Popeye swore by it. And all of a sudden it’s everywhere. All over food blog land, spinach is popping up as a popular ingredient somewhere you might not expect it – in what they’re calling “green monsters.” Spinach smoothie anyone?

A Google search for “green monster smoothie” turns up over 40 000 results and references to the aforementioned shakes.

Why would anyone want to add spinach to a shake? It certainly can’t be for the colour. I went through a brief stage of drinking “Greens +” with my breakfast every morning (for the health benefits) and finally, I couldn’t get it down anymore. Not only did it taste pretty awful – bitter with an aftertaste of artificial sweetener – but I couldn’t bear the sight of it after a while. Way too green to be drinking before I have had my coffee (and, in fact, anytime!). It is, however, definitely a nutritious addition to a breakfast shake,

So about those nutritional benefits. Spinach is known as a rich source of iron and calcium. According to the United States Department of of Agriculture, spinach contains a relatively high level of iron, compared to other vegetable and meat sources. This article cites the Journal of Nutrition’s claim that it contains at least 13 different flavanoid compunds that function as anti-oxidants and anti-cancer agents. Foodland Ontario and A Dictionary of Food and Nutrition both claim that spinach is an excellent source of vitamin A and folacin as well as a source of fibre, potassium and vitamin C.

Ok so I like a good shake. I am also interested in eating for health so in the name of research, I conducted a taste test with tasters ranging in age from 5 to 40+.

Despite the fact that “green monsters” seem to be made with a milk or dairy-free base plus some kind of protein powder, the drink I made was inspired by ZestyCooks’s recent post about The Power of Cranberries (a pretty pink drink!) and the drink I normally order when I go to the Body Blitz spa. I don’t particularly care for the artificial flavour and chalky aftertaste of protein powders and the thought of drinking a drink that looks like green milk is just not appealing at all. 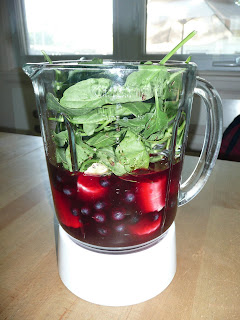 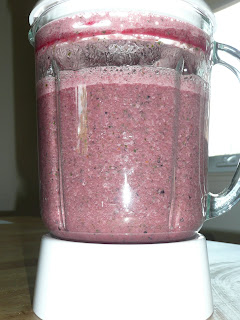 Results:
It got a thumbs up from one of our pickier younger tasters who declared that she “loved it” and asked for seconds. Our youngest taster didn’t like it at all – the texture was offputting. “It’s got bits floating in it!” he informed us, and he was right. Blueberry skin “bits” and spinach stalk remnants. All the adults were pleasantly surprised. Even though the bananas weren’t quite ripe enough and left a strange sensation in your mouth and the drink was an odd colour (“liverish” was one adjective used to describe it), it was definitely fresh tasting and didn’t taste like the spinach at all.

Verdict?
I say, as long as it doesn’t make the smoothie look green or taste like spinach, it’s a wonderful addition. A green beverage every day, even for my health? Just can’t do it. Sorry food blog land!