This week’s Cook the Book Fridays recipe from David Lebovitz’ My Paris Kitchen speaks volumes about how the food scene in Paris has changed over the past decade. Earlier this summer I reviewed Kristen Beddard’s Bonjour Kale, a charming tale of one expat’s quest to re-introduce a forgotten vegetable back into the Frecnh mainstream – kale or “le chou kale” as it’s known.

Back in the late 1990s when I lived in Paris you’d never have been able to locate kale but slowly, over the last few years, it has increased in both visibility and popularity, hence David’s ability to whip up an easy little breakfast/ brunch/lunch (it’s very versatile) dish with it would have been impossible to create when he (or I) first moved to Paris.

Basically it’s wilted kale topped with eggs, a touch of cream, goat’s cheese and some garlicky breadcrumbs (the absolute star of the show for me this week – I’ll be making more and keeping them on hand!). David adds some smoked salmon but I used a couple of rashers of bacon instead that I cooked until crisp and then tossed through the kale.  At 350˚F my eggs took much longer than the suggested 10-12 minutes until the whites were actually cooked (closer to 20 minutes actually) so if you make this recipe, watch out for that. It was a lovely brunch for one and the kale does make it feel like it’s mildly healthy 😉 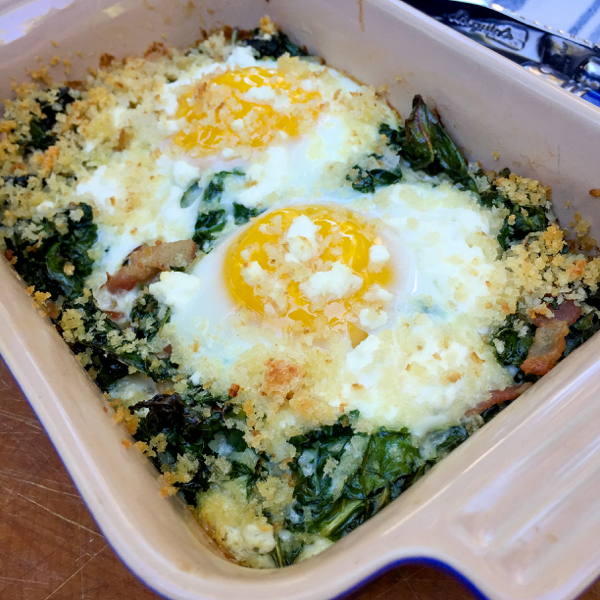 Get the recipe for David Lebovitz’ baked eggs with kale and bacon here on p 151 of My Paris Kitchen.

Purchase My Paris Kitchen for yourselves on Amazon (this link should bring you to the Amazon store closest to you) Or for free worldwide shipping, buy from The Book Depository then join us over on Cook the Book Fridays!

Please note: The product links from Amazon and The Book Depository are affiliate links, meaning if you click over and purchase something, I will receive a very small percentage of the purchase price which goes towards maintaining eat. live. travel. write. Thank you in advance!

Disclosure: I was provided with a copy of “My Paris Kitchen” for review purposes. I was not asked to write about the book, nor am I being compensated for doing do. All opinions 100% my own.

20 thoughts on “French Fridays: Baked Eggs with kale and bacon from My Paris Kitchen”