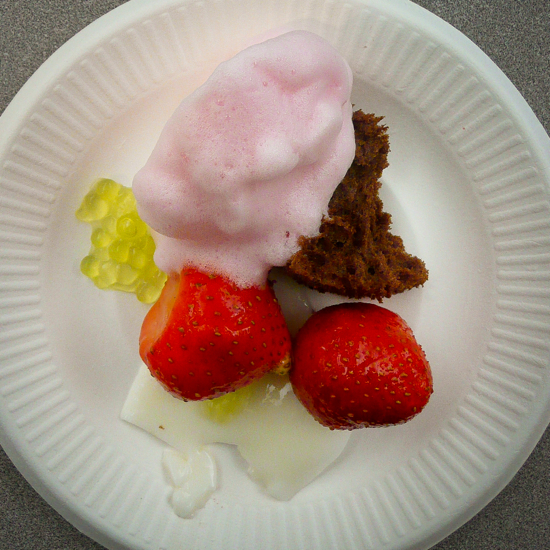 Yes, this week Les Petits Chefs really got to see the marriage of science and cooking (perfect since we work out of the science lab!) thanks to the generosity of Chef John Placko of the Modern Culinary Academy. Yes, the man who has dined at El Bulli in Spain and Noma in Denmark graced us with his presence for a fleeting (but action packed hour) this week and I can safely say we all left the labs thinking that science is way more fun than we thought!

Chef John has worked in Canada for the past 17 years with various organizations including Cara Operations Ltd, Prime Restaurants Inc, Campbell Company of Canada and recently completed 3 years as Director of Culinary Excellence at Maple Leaf Foods’ ThinkFOOD! centre.  He has worked in Australia and Mexico in hotels, airline and contract catering as well as restaurants. He has competed in culinary competitions in Australia, Germany, Canada and France (in the prestigious Bocuse d’Or competition).  Over the past 6 years he has been invited to present, demonstrate and teach modern cuisine to various culinary groups including GFTC, Humber College, George Brown College, The Cookbook Store and Nella Cucina (To promote Nathan Myhrvold’s mega set of books Modernist Cuisine).  His articles on molecular gastronomy, restaurants and other topics can be found in Food and Hospitality Magazine and Food in Canada Magazine. He runs John Placko Culinary Consulting and recently launched Modern Culinary Academy to promote the awareness and education of  molecular gastronomy. Whew! What a resumé – we are so lucky to have welcomed him into our humble labs!

Chef John came with an ambitious list of four recipes we would tackle in small groups, changing every 12 minutes or so (he’s so precise, you can tell he’s a Chef!) so that each group would work with each recipe. Organised chaos? Maybe. Fun? SO. MUCH.

(apologies for the photos this week – it’s hard to take decent pics when there’s so much movement and excitement and I’m trying to man a station at the same time!)

I was put on the “Yoghurt Sheet” station where the boys and I worked with Iota carrageenan and Kappa carrageenan (both of which work to form an elastic gel when mixed with dairy proteins) to transform yoghurt into thin sheets that you can roll up around various fillings. Magic!

Meanwhile, over on the “Cranberry Foam” station, the boys worked with Ms Stephenson using cranberry juice, Versawhip and Xanthan gum to create a stable foam tasting just like cranberry sauce, only without the lumps! So pretty! This foam also stays stable for several hours and can even be caramelized with a blow torch! Super cool.

Chef John manned the “Chocolate Micro Sponge” station whereby the boys made chocolate cake batter, poured it into those whipped cream dispensers you see at Starbucks (charged with Nitrous Oxide – N2O), then dispensed it into paper cups with slits down the side to allow some air circulation. Then they popped them in the microwave and zapped them for 45 seconds and watched as the magic happened…

Meanwhile, on the “Melon Caviar” station, Ms Carter supervised what Chef John had demonstrated right at the start of the session.  Melon juice and sodium alginate are mixed together in a blender to form the “gummy” base for the “caviar”. The liquid is then dripped, one drop at a time into a mixture of water and calcium chloride – the setting bath – where it forms little pearls or the “caviar”.

And the results? Well Chef John had us plate all the ingredients (you can see above) and they came together to produce a remarkably cohesive plate.  The boys seemed to love it, for the most part (“We’re eating chemicals, you know!”) and headed out with an odd assortment of food in their tupperwares, thrilled and proud of what they had achieved over the course of a short hour.

Who said that cooking with kids can’t be sophisticated? Chef John shares my view that if you raise the bar high, kids will come up to meet it.  I am SO proud of the guys. As always you know, but some weeks more than others they totally make me want to tell everyone how great they are 🙂  Thank you Chef John for sharing your knowledge in a patient, organized and fun way – it’s definitely an afternoon we will all remember!

For Petits Chefs parents (and anyone else interested) reading this, you can read about where to purchase those not-so-usual ingredients over on John’s site Powder for Texture.

Enter to win a copy of The Smitten Kitchen Cookbook here, courtesy of Random House. Open to anyone, anywhere in the world! Contest closes Monday November 26th at 6pm EST.