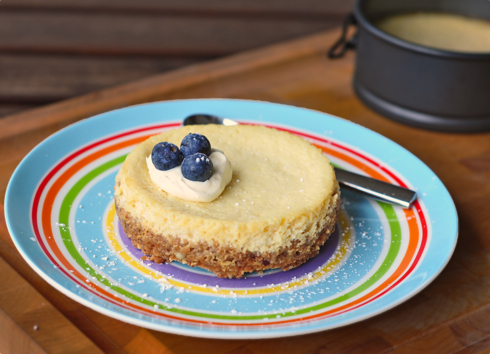 It’s my second to last recipe post for the Canadian Tire Kitchen Crew!  This time I was charged with testing out the Kitchen Aid ExactSlice 13 cup Food Processor.  I was really excited to try this out because our food processor is nearly 20 years old and whilst it still does the job, it’s much smaller so I often find myself doing things in multiple batches.  This model features:

As for my Mission this week:

Sometimes even with the best intentions, a perfect dessert can be more memorable than the main course.  Your mission is to recreate a special dessert from a special occasion!  That may mean replicating an anniversary’s crème brûlée or even baking that birthday cake you made in a pinch – the choice is yours!  So what are you waiting for? Get baking!

Ok then. I admit I had to read this a few times before I really understood what they were asking. And even typing it out now I feel slightly confused!  do they want a perfect dessert or one that upstages the main meal?  I chose to go with the “perfect” theme and decided to recreate (and hopefully perfect) a dessert that has been bugging me for a while now – baked cheesecake. 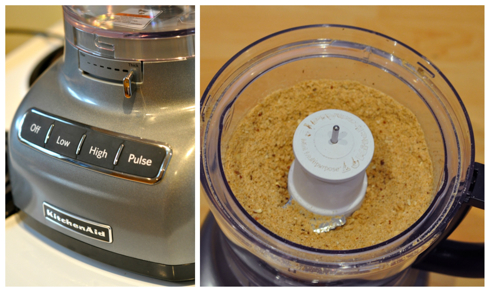 Oh, I have made them before but each time they have cracked on top. I’ve been meaning to make one for a while now and, as the crust of the cheesecake is one of my favourite parts, I thought it might be a good test for the Exactslice.  It must be said that the Exactslice is a great looking machine. So retro and professional looking.  It’s not too heavy, though its footprint is a little larger than I would like, given my lack of cupboard and counter space.  I set it to work chopping up hazelnuts and ginger spice cookies to make the crust.

I have to admit that I was disappointed by this machine when it came to this relatively simple task.  I chose to use the mini bowl simply because I wasn’t making a huge quantity of crust and not only did it take way longer than our 20 year-old powerhouse Moulinex food processor, but the crumbs (and in fact, whole cookies – they are tiny – and hazelnuts) remained stuck in the rim of the bowl, making clean removal of the lid virtually impossible. The lid is also rather difficult to remove – not sure if this is just because it’s new or because of its design but it’s awkward.  In any case, I was let down  by this normally trusted brand by its inability to carry out a simple task as quickly and as easily as my old food processor. 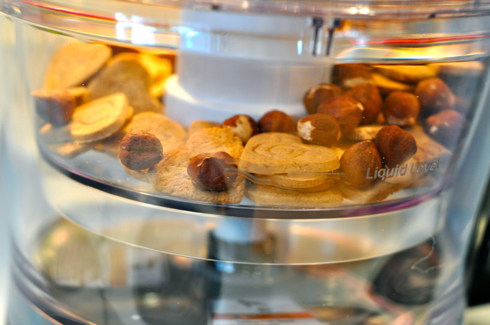 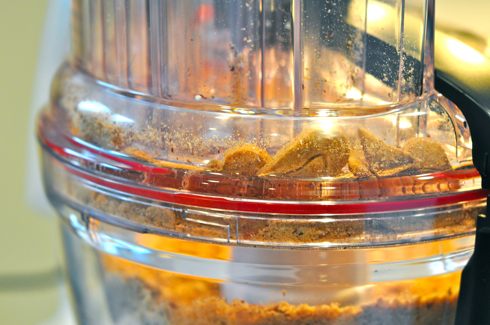 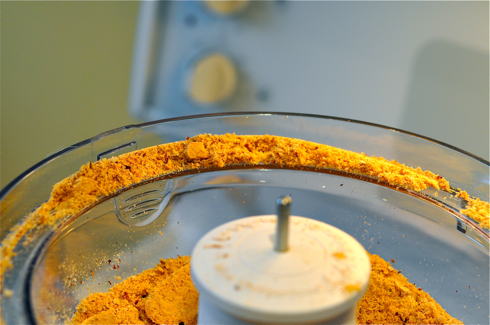 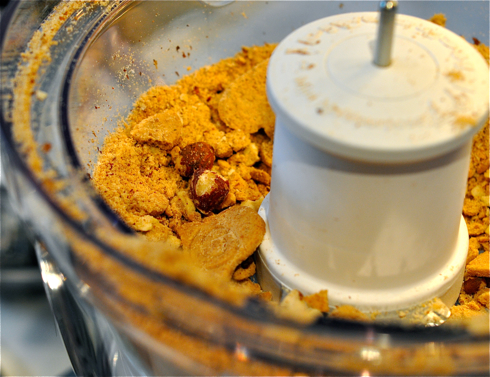 After a while, though it eventually got the job done and I got to work on the filling.  Now a few weeks ago, I received a wonderful sample pack of Oikos Greek Yoghurt by Danone, newly released in Canada.   The special straining stage used to make Oikos means only three ingredients (milk, cream and an active culture) are used and the process requires three times more milk than a regular yogurt. The result? A low-fat, high-protein yogurt with a thick and creamy texture that is perfect for enjoying as is or for cooking. Slightly tangier than regular yogurt, certified kosher and contains no gelatin or preservatives, Oikos is my new favourite brand!

As well as the honey and blueberry samples (which were literally devoured in my staff room where the pack arrived – people simply couldn’t believe the low fat and high protein content of such an unctuous, tasty yoghurt!), I received a large size of the plain which I had to hide away from my colleagues, bringing it home with every intention of a week or so of tasty breakfasts.  But then I got to thinking about my cheesecake and how I wanted to use sour cream, and all of a sudden realized that perhaps by substituting sour cream for Greek yoghurt, I might achieve a nicer texture in my cheesecake. I already know that yoghurt bakes well so I figured why not.  Also, I ended up using light cream cheese (since that’s what we had) and I think the thicker yoghurt helped compensate for that in terms of texture and certainly nothing tasted “light” about the end product. It was creamy and tasty – noone would even guess that it was made with light cream cheese and 2% yoghurt!

As I already had duck confit cooking away in the oven with no end in sight (it took around 6 hours), I ended up using the Black and Decker Convection Rotisserie Toaster Oven from my previous Kitchen Crew Challenge, slightly wary about the idea of making cheesecakes in a toaster oven. But I needn’t have worried – they were amazing. And they didn’t crack!  Of course, making smaller sized ones (I used 4-inch springform pans and I made two of these only!) there is less chance of them cracking but I was pleased nonetheless at my success 🙂

I served them with a dollop of crème fraîche and some blueberries and dusted them lightly with icing sugar.  Result?

A lovely bright, fresh cheesecake with a rich, creamy texture. And so easy!  I will definitely make this again – if I can get my hands on the Oikos before it’s all gone!

A light, bright baked cheesecake made with Greek yoghurt. 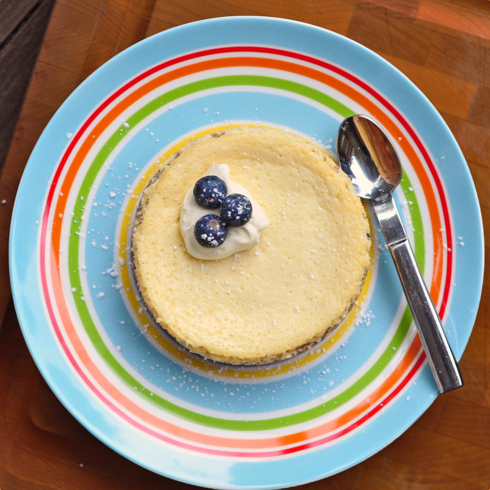 Disclosure: I was provided with compensation as well as a Kitchen Aid 13 cup Food Processor in exchange for writing two posts about the product. All opinions are 100% my own. The Kitchen Crew series highlights my stories, recipes and tips with promotional consideration made possible by Canadian Tire. If you want to uncover your kitchen’s true potential, stay tuned to the Kitchen Crew for my weekly missions.

I was also provided with samples of the Oikos Greek yoghurt. I was not asked to write a post about this product, nor was I compensated in any way.  All opinions expressed are my own (and, in this case, my colleagues who helped me “test” the yoghurt!)

Leave a Reply to Stephanie Click here to cancel reply.