It’s cold in Toronto. Very cold. And dark. All I want to do is stay in bed under the covers and read. Failing that, eat comforting, warm food. Which is exactly what we did last night. Neil is part of a team of chefs cooking a special dinner (auctioned at a Rotary charity event) next weekend and he is responsible for some side dishes and entrees and wanted to test some out this weekend. Since it IS so cold, I thought of Véronique’s tartiflette – perfect for the dark days of January…

Tartiflette is (in layman’s terms) basically a potato, bacon, cream, onion and CHEESE gratin. The feature that makes it special is the Reblochon cheese which is not that easy to come by in Toronto, so we did have to substitute (sorry, Véro!) with some other soft-washed rind cheeses. Verdict? It was delicious but it DID lack the characteristic nutty taste of the Reblochon. For the special dinner, we’re off on the quest to find some today…

First, we fried up the onions and bacon: 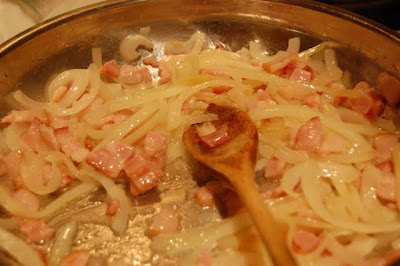 And added them to a layer of cooked potatoes in the casserole dish: 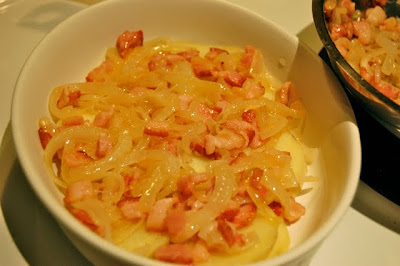 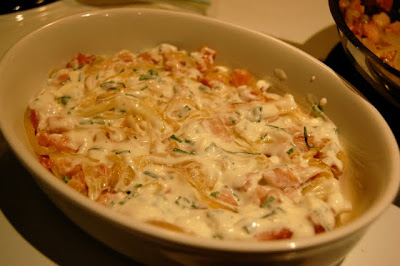 Another layer of each and then top it off with (what looks like a ridiculous amount of) cheese: 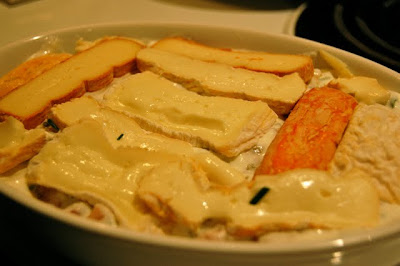 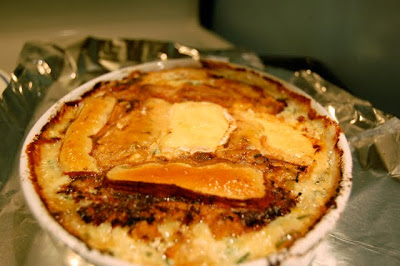 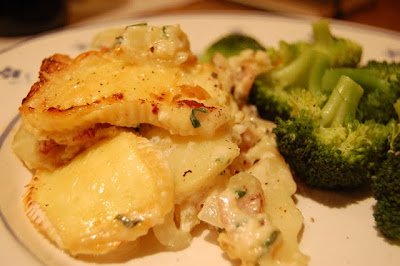 (Note: I served it with broccoli for some semblance of healthy!)

Definitely a make-again dish and you could totally make this much more healthy by using low or no-fat sour cream (sorry Véro!) and lower fat cheeses. (Note from Neil: Why bother?) A small portion of this would be a delicious accompaniment to any meat dish whilst a slightly larger portion is fine for a main. LOVE this!

Neil Update: In our quest for Reblochon, we tried The Cheese Boutique – likely the best cheese emporium in the city, if not the province. Unfortunately, at the moment it cannot be imported into Canada. (Time to rail on about supposed “health” regulations that favour chemicals in North America over natural products and honest bacteria, but that’s another guest post…) The cheesemonger recommended a Quebec artisanal organic cheese called “Champlain”. It’s apparently made by a French cheesemaker who did Reblochon, and has since moved here. So apart from the regional differences of cows and the like…made in the same way. So I’ll provide an update next week as to how this works out. 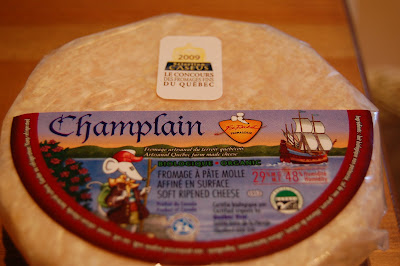 Next up in the kitchen, since why stop at ONE dairy extravaganza, was Elle à Table’s version of La Laitière’s petits pots à la crème. I just happened to have brought back a large quantity of Carambar from France 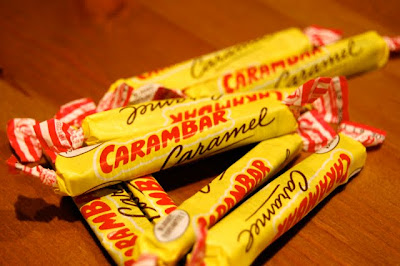 and as luck would have it, I had also received some wonderful Tahitian and Madagascan vanilla pods from Justin at Marx Foods to try out so I was all set up to make the caramel and vanilla versions. 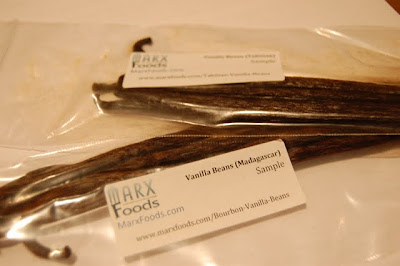 I chose the Tahitian over the Madagascan pods, since, according to the information I received from Justin, they “possess a fruity and floral aroma that some chefs, perfume makers and aromatherapists prize.” To my (untrained) nose, they certainly were more floral – the Madagascan ones smelled somehow earthier. 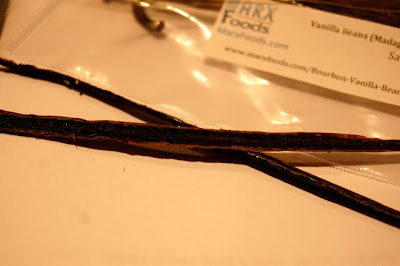 You start off by heating the milk with either the vanilla pod or Carambar: 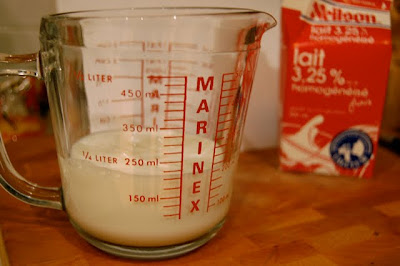 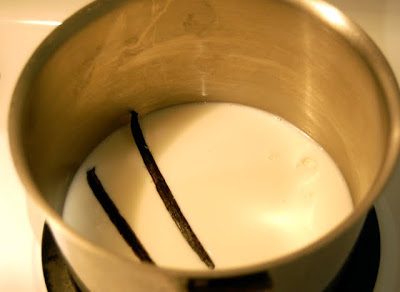 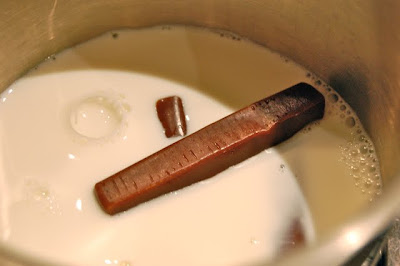 Then take them off the heat and add the cream, letting them sit for 10 minutes: 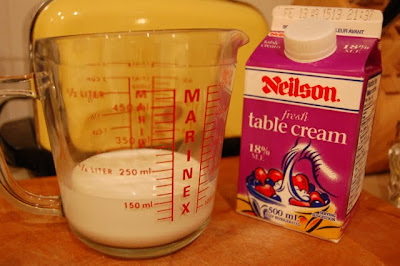 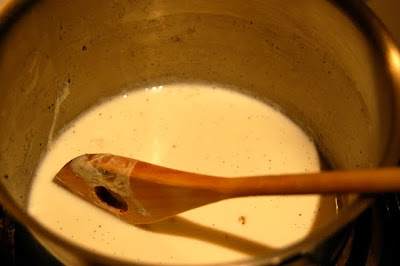 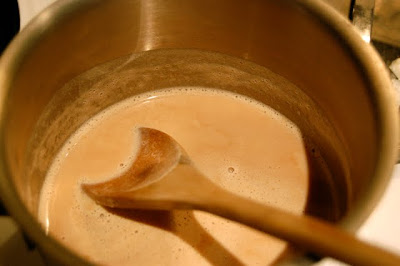 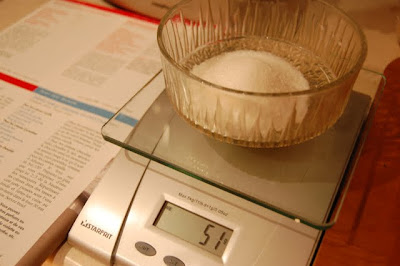 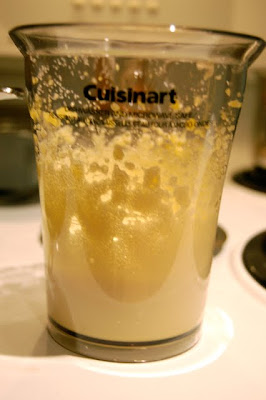 (Making full use of our new digital scale and Cuisinart immersion blender/whisker/chopper that we just purchased as a New Year’s gift for the kitchen.)

Then pour the milk/cream mixture onto the egg/sugar: 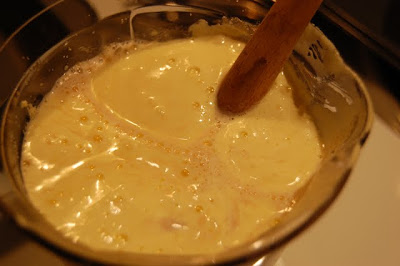 You can see it start to thicken immediately.

Then you cook them in a bain marie for about 30 minutes (and yes, I KNOW the pot size here is different so might have affected the cooking time but it didn’t seem to…) 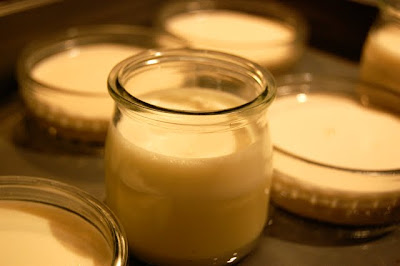 And voilà – Nestlé, eat your heart out.. 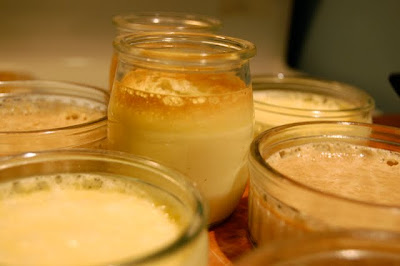 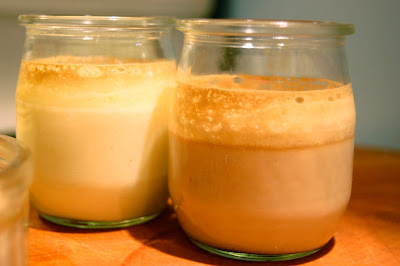 “But how do they taste?” I hear you ask… 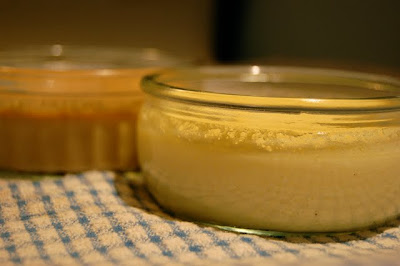 Actually, JUST like the real thing! The Carambar one was a little sweet for our adult palates so if I made them again, I might use 3, not 4 sticks for that quantity of milk/ cream. The vanilla one was delightful and we wondered if we might freeze it for a creamy, kind of ice-cream… Hmmm… 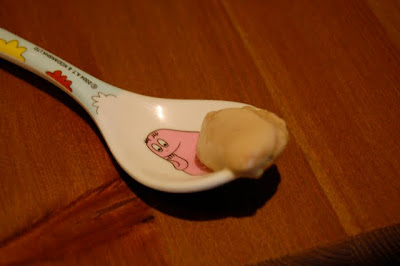 Note from Mardi: For the record, Neil has a Le Petit Prince one!