As I mentioned before, I have now taken 12 flights in the past month. OK, so some of them were just little puddle jumpers in Laos and therefore didn’t serve meals but many of them did and I am amazed at the difference in quality of what’s served. It does not seem to bear any relation to the price of your ticket – indeed, some airlines serve amazing food on regular (short) flights, like Qantas while some, well, they just don’t… you know, like my outbound flight from Canada.

On my Sydney to Bangkok leg (9.5 hours), I was served a very average “special meal” (I order special meals when I travel so I get served first and am able to get out and you know, brush my teeth after the meal without there being a great big line for the washroom. Oh, and you get offered drinks TWICE if you have a special meal – once when they serve you the food and again when they are serving everyone else…). 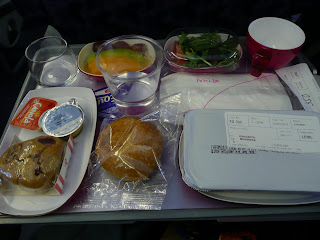 and up close, the main attraction: 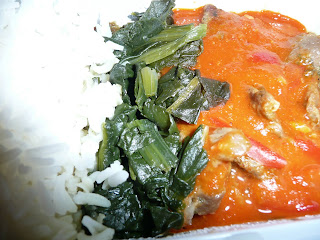 This was lamb, spinach and rice. Now I am no chef but I do know a thing or two about food preparation and wonder who on earth authorised LAMB to be put in this meal. Tough, tough, tough (and tough luck for me, who was left unimpressed and hungry). Not to mention, it’s meant to be a low fat meal. Weird..

The next day, Bangkok to Vientiane (Laos) – probably just over an hour – we were fortunate enough to be served a lunch-type meal: 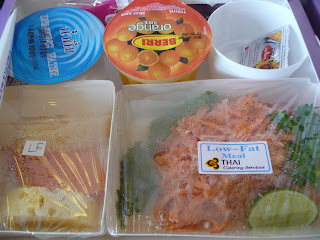 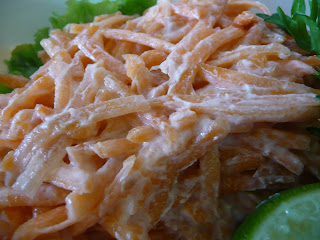 Yes, this was literally a shredded carrot salad in some sort of light mayonnaise. Quite nice but where’s the protein???? 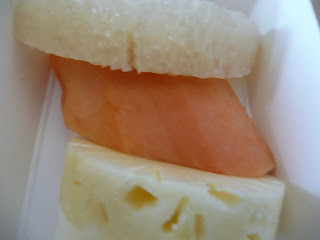 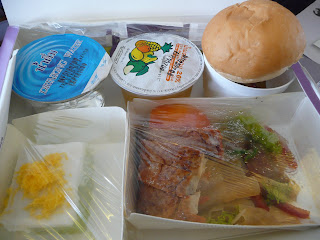 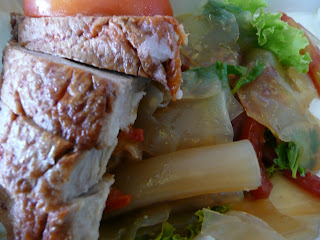 Yes, he got duck and egg noodles and salad. 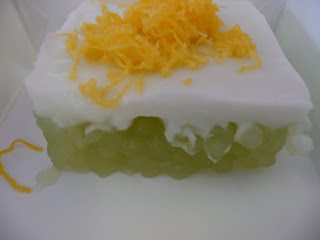 and this strange dessert that he described as tasting like slime. Kinda looks like it too, huh?

My next food experience on a plane seems to be devoid of photos. That would be the Bangkok-Sydney leg (9 hours) where I was seated next to a large man who was sniffing the ENTIRE flight. This was not good and he must have seen the horror on my face after about an hour when I realised that it was not going to stop and he proclaimed that he “wasn’t sick” but had just had nose surgery and couldn’t blow his nose so had to let it run and sniff… Uh huh because that makes it all better mate. Not. On three hours’ sleep, this was not a good situation. It forced me to:

1. Watch 4 films I otherwise would not have seen (needed the sound to block out the sniffing).
2. Not take pictures of my food because there was no room for my little elbows as on top of everything, he was an ARMREST HOG (don’t you hate those???).

Apparently the food was uninspiring on this flight anyway since I appear to have blocked it out of my memory….

Onto the last leg (Sydney – Vancouver – 14 hours, and Vancouver – Sydney – 4 hours). After a disappointing experience on my outbound flight with the AC food, I wasn’t expecting much for the final leg of my trip… I guess after so many flights and so much airline food in the past month, I have learned not to get my hopes up. If you don’t expect much, you might be pleasantly surprised, right?

In any case, for the 14 hour Sydney-Vancouver leg, I was mildly surprised… 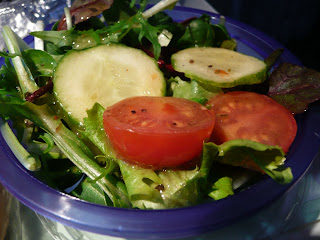 A nice salad to start with a tangy Italian dressing. 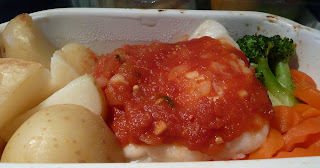 Fish (yes, I was hungry and this one didn’t really taste much like fish – in fact it might have been chicken…) with a tomato sauce and steamed potatoes and carrots (oh and a lone broccoli) 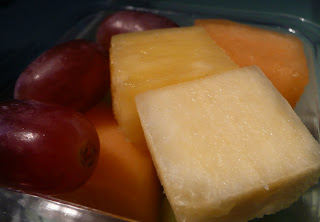 Fruit salad. After two weeks of delicious fresh fruit, this wasn’t too impressive but it looked better than the “cake” on everyone else’s trays (those who didn’t order a special meal).

Later…. (somewhere over the Pacific Ocean at a time which was neither a meal time in Sydney OR Vancouver…) 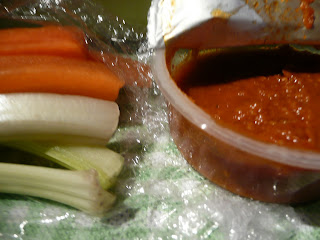 Yum. Carrots, celery and zucchini sticks with a curry-tomato dip. 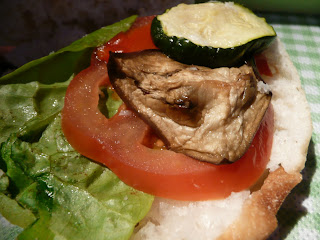 A “sandwich” with lettuce, tomato, zucchini and a strange mushroom-y like thing. I took the top half of the “ciabatta” off since it was a bit too doughy-dense for my liking.

Breakfast arrived at 5am Vancouver time: 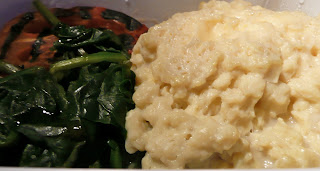 Sautéed spinach which was very tasty. The yellow thing was some sort of egg-like substance masquerading as either an omelette or scrambled eggs. It was very strange. Much salt was added to try to make it taste like something… 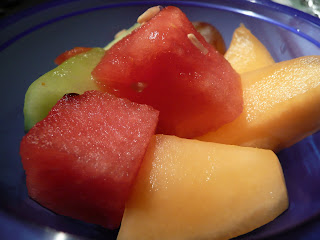 And our friend the fruit salad. SO over this at this point in time but ate it anyway since I needed to get rid of the taste of the aforementioned “eggs”.

And then of course for the “domestic” leg of the trip, you get squat. Unless you pay for it. Clever clever Air Canada to label that part of the 18-20 hour trip “domestic” so they don’t have to feed you.

7 thoughts on “Airline food – the good, the bad and the just plain weird…”