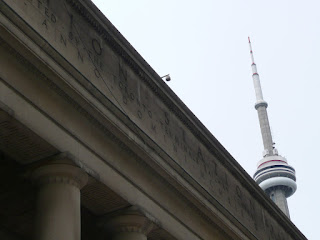 9.30am on a Saturday morning. It’s cool out with the promise of sun later. Neil and I are wandering around Union Station wondering where on earth this statue is? We’re supposed to meet there for our first Toronto Outdoor Club event – the Amazing Race Toronto (4th edition).

Turns out the statue is “in storage” whilst Union Station undergoes a bit of a facelift. Well that’s just great. So we lurk around the front of the station, scoping out the passersby, trying to identify other potential racers. Eventually a motley crew of punters materialises – ranging from some very fit looking types to, well, us… 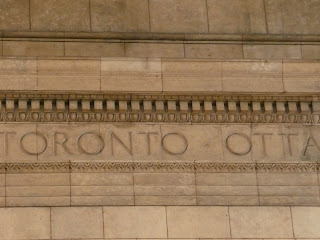 10.30am. We’re well into the instructions for the race. Public transport or feet are the only means of transport allowed. No jaywalking (we were all pooh-poohing this idea until the race organisers told us that last year someone got hit by a bus in the Race… Uh, ok – no jaywalking for us!). Clues and quarters (for payphone calls) are distributed. We have nine clues. There will be seven checkpoints. At each checkpoint we will have to answer a question or perform a task. If it’s a question, we have to phone from a particular payphone (number provided, close to checkpoint) to call in the answer. If we’re right, we get given the name of the next clue (they’re all Canadian authors, it’s a literary theme today) and the right to proceed to the next checkpoint. 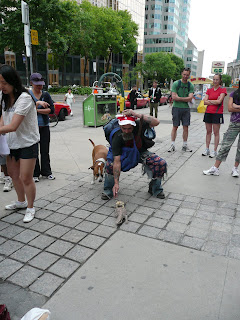 10.50ish. We’re off. Fast. Seriously, I HATE running and am pretty crap at it. But the minute we work out where we are going, we both start sprinting like madmen. Nope, no competitive streak here! 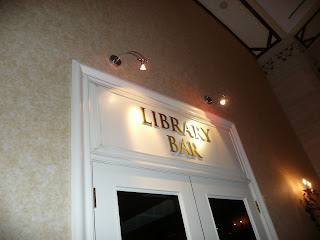 The Library Bar at the Royal York Hotel. We have to say how much certain item menus cost and phone it in. Fortuantely, Neil knows the Royal York well, it’s the home to his Rotary club, so we complete the task and find the phones quickly.

Checkpoint 2 (at this point, I stopped looking at my watch – no time).

We emerge from here: 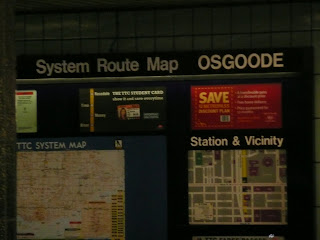 and head off to Osgoode Hall to find a plaque. Following three other teams, we didn’t have to think much… 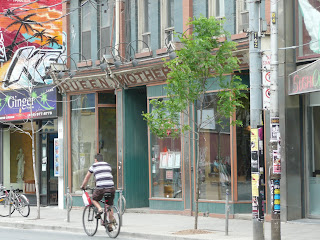 but we’re actually NOT looking for the Queen Mother Café. Nope, we’re looking for the “approximate location” of a fictitious restaurant, Toxique, which features in Margaret Atwood’s novel The Robber Bride. Yes, you read that right – fictitious and approximate do not make for an easy checkpoint to find!

Ok now, Neil and I are always the first people to laugh at those contestants on the real Amazing Race who wander back and forth past clue boxes oblivious to their very prominent location. But that’s exactly what we did. No amount of Googling on my iPhone could help (and yes, smart and cell phones were allowed). Eventually we figured out the cryptic clue to find the checkpoint: 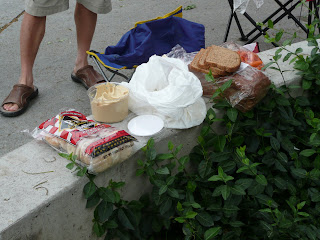 Task: Find a stranger and ask them to come and have a bite to eat (above) and then the three of us would talk to each other about “why Zenia stole my boyfriend” (a theme of the Atwood novel). O-kay… Neil the fearless (and shameless) nabbed a stranger pretty quickly and though he didn’t really seem to understand the task, we made it through fairly quickly (with some carrots and hummus in out tummies to boot!).

Checkpoint 4 (and the pictures start to dwindle here – it was getting hot and we were getting more and more competitive!) led us to the Lillian Smith library which is famous for its collection of children’s books. In fact we were looking for the age of a girl in a portrait that I had already figured out on the way in the streetcar (thanks Google). Since we thought the payphone was in the library, we went there but it turns out there was no need – it was on the corner (that we passed on the way). Looking back, that was 5 wasted minutes (see, I told you we were competitive!).

Checkpoint 5 was frustrating. We went through the crazy busy Kensington Market in search of a house that appears in a science fiction novel (sorry for the vagueness of some of the tasks but we had to give the clues back at the end and I am relying on my memory). We were off by ONE house but fortunately did not have to do the mad dash back to the proper payphone which was broken – once we finally figured out the correct answer, we just phoned from Neil’s cell..

Checkpoint 6. Getting VERY tired here… and scene of our my one mishap…

Off to locate Coach House Press, located in a tiny lane in the St George Campus of the University of Toronto. This involved getting on the subway at the station I use to go home or to yoga from everyday from school. And it’s where I went into autopilot mode and put us on the subway GOING IN THE WRONG DIRECTION. Worse than that, we had to wait ages for the train (the one going in the wrong direction) and when we realised the mistake, we then had to wait what felt like hours for the correct train. Did I mention I put us on the train going in the wrong direction? Bad words were uttered by Neil… (and I admit this probably added 15 minutes onto our time…)

However, once we found the checkpoint location, we rocked the challenge – solving an anagram. 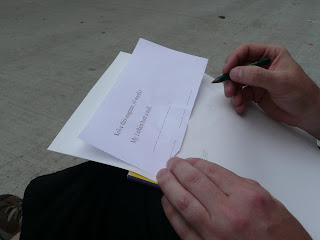 The answer? “Literally the most fun.”

We took maybe 5 minutes to solve this and got the evil eye from many of our fitter competitors. See guys, it’s not just about being fit and fast….

Checkpoint 7 was a scramble around the University of Toronto to locate a certain building and count its dormers. The clue stated you were supposed to head off to a certain phone booth to
call in the answer. What we didn’t know is that some other teams had reported this as a non-functioning booth so you were allowed to use your cell phone. Uh, yeah, thanks for passing that on… (another 10 minutes added onto our time unnecessarily – did I mention we are a tiny bit competitive?).

But guess what? Lillian uttered the fabulous words “You’re done!” and we were to just head down to the most excellent Duke of Richmond pub at the Eaton Centre. At this point, hot and sweaty and with very tired legs (we figure we had probably run between 5-7km, which for non-runners like Neil and jogging-hating Mardi is pretty good going!), I forgot that we were very close to a subway that would have taken us directly there. Instead, we probably added around 5 more minutes to our time again, unnecessarily…

We made it though: 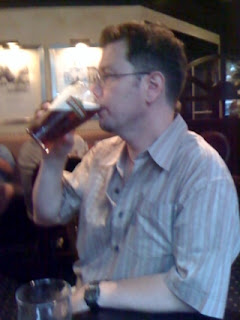 Kilkenny for Neil and… 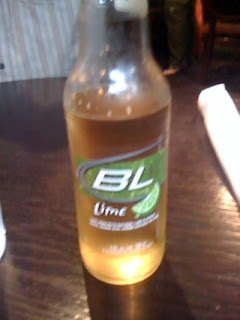 We had SO much fun (and we’re still talking to each other!) and will definitely be doing this again next year. I highly recommend it. Travel without leaving your own city – what could be better for your wallet in these tough times?

4 thoughts on “Amazing(ly sore legs after this) Race!”