Breakfast on Sunday had to be something to soak up the aforementioned evening of imbibing!

Amanda suggested Good Enough to Eat, a sort of cow-themed café that already had a queue outside it when we arrived at 10am! We had French toast, omelettes, toast, fruit, salad, coffee and delicious juice, though I held off on the coffee because Amanda had promised to take us to Joe, “the best coffee in New York” (now my sister, like myself, is prone to exaggeration, however I have to say that this time she was right. Damn good coffee!

Total for breakfast for three plus coffee at Joe: about $45

Later we wandered over to the New York Historical Society (often overshadowed by the nearby Museum of Natural History) for a couple of excellent exhibits: Landmarks of New York and Harlem: Photographs of Camilo José Vergara 1970 – 2009.

In the afternoon, we wandered by the Morgan for their exhibit on Cartoons from the New Yorker (sadly it ended last weekend but funny and relevant in these tough economic times)

After a well deserved nap, we headed out to dinner. Amanda had said there were some interesting places to eat on Amsterdam between 104th adn 110th streets and we were hankering for Thai so we ended up at Thai Market at 107th and Amsterdam. Delicious and good value (we noted a weekday lunch option for $8.95).

and a couple of beers so it ended up being around $60 all in.

Later, we were wandering the streets looking for a post dinner drink or two and Amanda suggested that she had seen a bar that she would like to try. Off we headed, assuming it’s going to be a nice little café serving wine with maybe some nice jazz playing in the background. 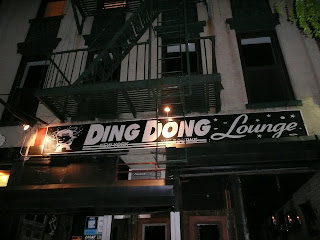 and Amanda’s saying “Oh yeah, this is the one!” Excuse me? The “Ding Dong“??? We look inside. It’s dark and playing loud punk type music… and it’s kind of empty. For Neil this is a challenge and had it not been for him, we most likely would have ended up in the safe jazz bar!

So in we go. And no kidding, it looks like this: 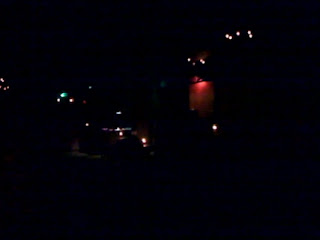 And actually not that empty. Full of local characters, including the barman, Chad (though Neil could have that wrong) who enjoyed Neil’s company so much (well and the fact that he talked four people into staying and buying drinks when they were about to leave must have helped also) that he got a free pint.

Add to this a host of people coming and going with various reasons for being there (pizza and cake anyone? or how about a nice bottle of water? game of pool? choose a few tunes on the digital jukebox perhaps?) and it made for an extremely entertaining hour and a half.

Apparently there is a Ding Dong Lounge in Melbourne, Australia. Where I am going to be in July…. Stay tuned! 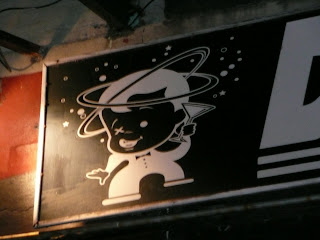 Since, after 1.5 pints (Mardi) and 4 pints (Neil) we felt a little like the Ding Dong logo, we took the subway followed by a taxi back to the hotel.