Arriving at 8am put us at the hotel at 9am. Penelope is directly opposite the hotel at 30th and Lexington and even at that early hour, it was packed. The food was fresh and delicious and reasonable portions (i.e. not humungous but definitely substantial).

I had “Sam I Am” described as:
Two farm fresh eggs scrambled with grilled asparagus and crumbled feta cheese; served with toast and homemade french fries. $13

Amanda had “Eggs Any Style” described as:
Two farm fresh eggs any way you like ‘em. With toast and homemade french fries. $7.75

The total bill for the three meals with coffee was about $40US inc tip and tax.

From Penelope we made out way to the Met (pay what you can, I believe we paid $5 each) to check out a couple of exhibits (The Model as Muse and The Pictures Generation). Each trip we choose a couple of exhibits to see because the Met, like the Louvre and the British Museum, can be very daunting if you try to “do” it all).

Just down Fifth Ave we stopped in at the Apple Store… oh, wait, I said I was only documenting necessary expenses, right? Ok, then, moving right along!

Dinner was early since we had a show to get to. We took Amanda to Dos Caminos on Park Ave South for some truly stupendous Mexican. Neil and I had stumbled on this a few years ago and were blown away, in particular by the guacamole which they used to make right at your table to your taste (mild, medium, spicy). I was there again last year with a colleague and it was still as good so we went again. It did not disappoint

Starting out with some margaritas ($11 each) and not one but two serves of guacamole at $12 a bowl (medium – sorry Neil!), we shared Tacos carnitas (slow roasted pork, green chile salsa, aged cotija cheese) for $12 and the grilled shrimp quesadilla (open-faced crispy flour tortilla, chile-marinated shrimp, mexican cheeses, smoked wild mushrooms and oven-dried tomatoes) for $21.

Total meal for three inc drinks tip and tax: around $100US.

Neil and I headed off to City Winery to see The Proclaimers live ($35 seat plus a bottle of wine at err.. $40). What a great place, though it seemed they were kind of squeezing people in for the show part of the evening – too crowed at the little tables – but a hugely fun evening nonetheless. It’s good to see that The Proclaimers, like the rest of us, have aged also! Next trip to NYC, I am pretty sure we will return here to eat and drink – they have a fabulous wine list and out concert table mates (from Stratford, Ontario, wouldn’t you know?) highly recommended the food.

From there, we headed to the Campbell Apartment, located in Grand Central Station. We tried to go on a previous trip but arrived just as it was closing. This time, I done my homework and made sure we were there well in time to enjoy a drink! New York Magazine says of this place:

Tucked away in Grand Central Station, this classy lounge is the restored private office of early twentieth-century tycoon John W. Campbell. On weeknights, the 2,000 square foot space is a bit overrun with commuters grabbing a Prohibition Punch or the signature Terrace Punch before catching the train home. It’s more fun to go on the weekends or closer to closing time when you can get a seat and sip your Scotch while you pretend you’re in a Hemingway novel.

I had the Prohibition Punch: 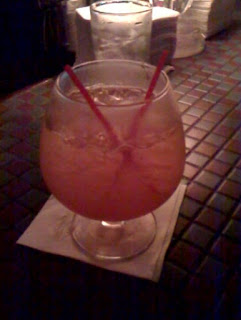 and Neil had the Rum Runner: 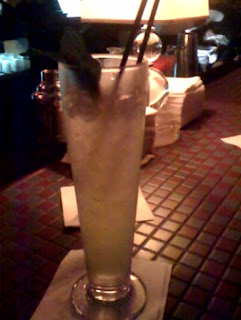 It was after drinking these that we realised it was pouring rain so the aforementioned taxi came into play….

1 thought on “Your NYC budget CAN include cocktails at Grand Central!”